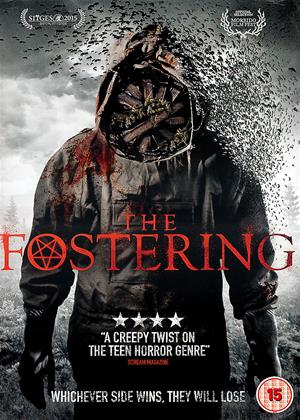 Synopsis:
Ale, Magu and Jorge go on a trip to visit their friend Apolo at his family's farm for a weekend of fun. At the same time, Sebastiao and his younger brother Luciano are getting ready to perform the spiritual ritual their family has been tasked with every nine months, for centuries. On the night the two groups meet, they find out that what they thought were scary tales becomes more than real. It is now up to them to prevent evil to be born and take over the world.
Actors:
Pedro Caetano, Pedro Carvalho, Mariana Cortines, Felipe Frazão, Diego Goullart, Ivo Müller, Sidney Santiago, Clara Verdier
Directors:
Rodrigo Gasparini, Dante Vescio
Producers:
M.M. Izidoro
Creators:
M.M. Izidoro
Writers:
Guilherme Aranha, Rafael Baliú, M.M. Izidoro
Aka:
O Diabo Mora Aqui
Studio:
Matchbox Films
Genres:
Horror, Sci-Fi & Fantasy
Countries:
Brazil, Horror, Sci-Fi & Fantasy

Reviews (1) of The Fostering

The plot is described thus: Three teenagers go to visit a friend at his old farmhouse for the weekend. What they didn’t expect was to be stuck in the middle of a centenary war between good and evil…

I mention the official ‘blurb’ because whilst this is a loud, relentless, frightening tour-de-force, the storyline becomes baffling on more than one occasion. There are so many twists and turns and revelations (especially towards the end) that the viewer ends up very satisfied but perplexed.

Apolo (Pedro Carvalho) invites his three friends for a visit at his farm. The building has a history – in the past, it was a slave plantation that also cultivated colonies of bees and sold honey (leading to some comparisons between the hierarchy of bees and the puritanical abuse of lower classes – slaves, in other words). In the basement, Apolo has set up a ceremony to free the spirit of a baby’s tortured soul. The child is the result of a slave owner, known enigmatically as The Honey Baron, impregnating the mother of one of his subjects, who later killed the child. Two descendants of long-dead slave Bento (Sidney Santiago), Sebastião and his younger brother Luciano, raise Bento from the dead and together they travel to the farm to halt proceedings, knowing if the child is resurrected, then so is The Honey Baron.

The sensitive Ale (Mariana Cortines), who is no stranger to hearing voices in her head anyway (and takes medication for this unspecified condition), is subject to some horrifying moments as the spirit appears to seek possession of her. Her friend Maria (Clara Verdier) probably suffers the most, and her relationship with the truly horrifying Honey Baron might well promise nightmares yet to come …

There aren’t many Brazilian horror films. I’m not sure why this is. Would ‘The Fostering’ have benefitted from some extra clarity? Possibly not. The chaos of the imagery (Directors Rodrigo Gasparini and Dante Vescio are unafraid to use limited colour close-ups as a disorientating effect) and constant subverting of expectations helps induce a memorable series of events that demand scrutiny long after the film has ended.