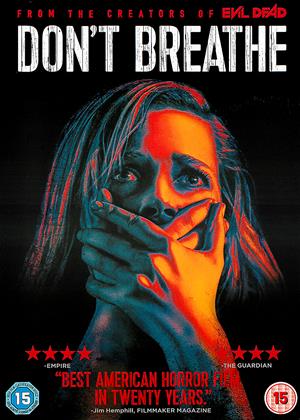 The money is compensation he received following the death of his daughter, who was run down by wealthy Cindy Roberts (Franciska Törocsik). Nordstrom is devastated and bitter that she should be let off her crimes so lightly.

I love films that present a ‘world within a world’ - that is, an isolated utopia hidden in plain sight: Norman’s home, which he rarely leaves (as established early on), is a dark sprawling private hell personalised to his needs and advantage. Outside, the sun shines and life continues. Inside, anything can happen, and no-one may ever know. When the three would-be robbers enter this world, it isn’t long before one of them (Money, I’m glad to say) is despatched. For Rocky and Alex, trouble is only just beginning …

Scenes often begin with blurred shots or extreme close-ups that obfuscate the new perils the characters find themselves in, revealing every desperate detail with an agonising (and deliberate) slowness. Writer/Producer/Director Fede Alvarez is clearly a name to look out for. ‘Evil Dead (2013)’ composer Roque Baños’s wonderful music score is exceptional also, a collection of moody, occasionally screeching instrumentation that really sells the growing unease. The discovery of Cindy Roberts, bound, gagged and pregnant, is shocking. She took away Norman’s child, so he thinks it is only right she provides him with a new one. Except her death whilst trying to escape with Rocky, puts that idea to rest.

‘There is nothing man cannot do once he accepts the fact there is no God,’ says heavily armed Norman shortly before attempting to artificially inseminate Rocky using a turkey baster in a bid to replace once again, he hopes, his murdered child.

His plans foiled by Alex, and disorientated by the alarms, Norman fires randomly all around him, blowing a hole poignantly in a photograph of his daughter’s smiling face.

I generally prefer independent horror films, often preferring them to bigger budgeted, more diluted mainstream offerings. This is hugely enjoyable, and very tense. There are no heroes, no-one without flaws, just wronged people. Someone online described ‘Don’t Breathe’ as a heavily expanded variant of the Buffalo Bill segment of ‘Silence of the Lambs (1991)’, which is a pretty good synopsis. It is good to see this doing well in the commercial arena; I wish more managed to gain such attention.

Really enjoyed this thriller/horror good suspense and great story of 3 people who rob houses but this time they thought they had an easy target on a ex soldier house with him being blind. Things get harder and a bigger risk than they were expecting.

A film that plays with your assumptions and turns them on their head - who are you rooting for and why? Do you think it has the right ending? A good story for discussion when you've seen the movie. Very suspenseful and involving, and excellent acting by the whole cast. Recommended.

Don’t Breathe has a moral questioning of who is more in the wrong. At first I could sympathize with the blind war veteran in his Detroit home, defending it from three young thieves seeking to pilfer his hidden safe of cash. But as the thieves venture further into his house, they discover he might not be such a helpless or innocent old man after all. The movie then asks us perhaps not to sympathize with these characters, but hope they don’t suffer a horrible fate in the veteran’s house of horrors.

The thieves breaking in are at least given brisk and proper introductions so that we can at least identify their situation. Rocky, Alex and Money are three delinquents attempting to steal their way out of Detroit. Rocky desperately wants to take her younger sister out of the city and give her a better life outside of her vile family. Alex has an in for breaking into houses with his father’s business of security systems, allowing him and his cohorts to slip into houses without detection. Money is just in this for the glory of being a gangster, becoming hostile if Alex so much as looks at Rocky affectionately. They’re smart enough to weigh the risks and only steal what they can pawn without being caught. Most of this process goes out the window when they discover that the blind veteran Norman (Stephen Lang) is sitting on more than enough money for the trio to ditch their decaying city.

But Norman is no ordinary blind veteran, as his disability clearly hasn’t affected his ripped muscles or keen instincts. When the thieves break into his house, he is quick on the draw with a pistol, not afraid to blast whoever enters his home without speaking or doling out false stories. The movie soon turns into a horrific game of hide and seek as the thieves attempt to sneak silently and Norman tracks them with his keen hearing. He bolts up windows and doors while they scurry and hide in closets and rooms.

Does this sound silly? It is, but still enjoyable for the intensity that is genuine and the over-the-top nature of Norman’s trap of a house. Director Fede Alvarez knows how to make a house terrifying, what with him having directed the Evil Dead remake. There is money inside this house, but the thieves discover something far worse in the basement. And as the movie goes on, it continues to mount the shocking and repulsive twists with the tongue-in-cheek allure of a Roger Corman horror picture. The thieves crawl through vents, feel their way through a dark basement, block doors and wedge out of windows. Even leaving the house does not make them safe, as he’ll hunt his attackers down until they’ve all paid for waking and robbing. The shock and terror reaches such an absurdity at one point in which you’re either with it or taken out of the experience.

Most of what sell this risky premise is the presence of Stephen Lang with his bulging muscles and iconic white flattop hair. Every time he lurches towards these young thieves with his aggressive nature, it’s enough to make you terrified even when he’s not wielding a gun as he does for most of the picture. He spends most of the movie mute and for good reason as Lang attempts to put on a mumbling serial killer voice. Lang usually has a natural military voice, which makes me wonder why he didn’t put it on for the role of an aged and disabled veteran. He sounds strange when trying to attempt a Buffalo Bill impersonation.

One could be engaged in the moral questioning of Don’t Breathe’s story, but it ultimately boils down to a thriller ride of Lang chasing young punks off his property. And what a ride it is! It’s a relentless onslaught of a horror chase that never wastes a scene or dampens the impact as the movie continuously amps up the nerve-racking intensity. Even the eventual reveal of the backstory for Lang’s character also carries a heavy shock and leads to one of the grossest scenes in the picture. You’ll never look at turkey basters the same way again.