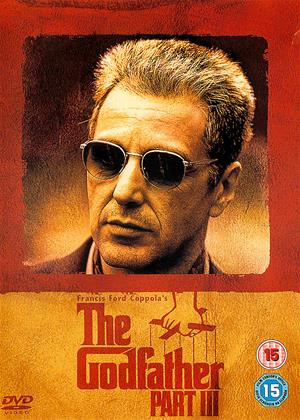 Reviews (3) of The Godfather: Part III

The final outing in the Godfather trilogy required a superhuman effort to match the quality of the first two instalments. It was too unrealistic to hope that Coppola could reach those heights for a third time. While heavily criticised upon its release, today the Godfather III has a certain air of respectability. It marks another period of transition for the Corleone family, with a changing of the guard once more. Everything that goes around comes around as the saying goes and there is a real feeling of symmetry upon the conclusion. At the end you really feel as if you have experienced the lives of characters in real detail, such depth that other films cannot hope to rival. Sadly Andy Garcia has never been better since, and neither have mafia or gangster movies.

Way below the high standard set by the first two films - The Godfather: Part III review by RP

I've recently taken the opportunity to see (again!) the 'Godfather' trilogy. The original film in the series was made waaaaay back in 1972, 'Godfather Part II' in 1974 and 'Godfather Part III' in 1990. Strictly speaking, I'm not seeing it 'again' as I can't even remember seeing the 3rd film before. Perhaps that's because it really isn't up to the high standard set by the first two films... Time has passed since the events of 'Godfather Part II', the Corleone businesses are now wholly legitimate and the casino interests sold. Michael Corleone makes a play for control of a Vatican-owned global property business but is out-manouevred, even double crossed, by powerful players within the Church. At the same time his hot-headed nephew Vincent stirs up trouble with an upstart New York mafia boss, there is a helicopter-borne shoot-out which wipes out the older generation of mafia bosses, Michael retreats to Sicily to recuperate and sort things out, anoints Vincent as his successor as the Godfather, arranges for assorted killings to sort out a corrupt Vatican while watching his son singing at the opera, sees his daughter killed, and dies himself – of natural causes. So, a long, complex, confused story, jumbled plot lines, some real events mixed in (Roberto Calvi aka 'god's banker' was indeed found hanged under Blackfriars Bridge in 1982, corruption and huge losses at the Vatican Bank, control by the shadowy P2 Masonic lodge etc are all real news items. Aside: In the film the character Frederick Keinszig is a heavily fictionalised Roberto Calvi), and ropey dialogue. Frankly it's not a patch on the first two films in the series and while Al Pacino is always worth watching, Andy Garcia in the role of Vincent is never convincing enough as a strong 'Godfather' figure. The director cast his own daughter Sofia Coppola as Michael Corleone's daughter, Mary and the semi-incestuous love interest of Vincent. Hmmm... opinion is polarised as to whether this bit of vanity-casting was worth it. My verdict: The film is OK, but as a follow-on to two superb predecessors it is fairly disappointing. I'll give it 3/5 stars.

Poor by comparison - The Godfather: Part III review by NI

Complicated, tortuous and far away from the world of the first two films, it also stretches the believability string. Pacino is below par, Keaton has lost her bloom but Garcia is good. Only made to get people out of financial trouble.