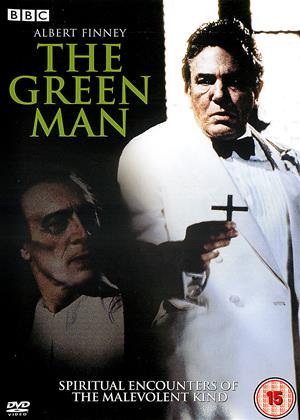 Synopsis:
Maurice Allington (Albert Finney) owns an upmarket country restaurant 10 miles outside Cambridge. Formerly an inn, The Green Man in the tradition of many old buildings, is reported to have had at least one ghost. Dr. Thomas Underhill, a 17th-century Doctor of Divinity, was rumoured to have been the perpetrator of a number of unsavoury crimes, not least of them being the horrific murder of his wife, and his spirit is said to haunt the medieval restaurant. Maurice, however, believes only in the spirits which come out of a whisky bottle and uses the tale of Dr. Underhill and his associated ghosts simply as a spine-chilling 'hors d'oeuvre' in his already successful restaurant.
Only his teenage daughter, Amy and daughter-in-law, Lucy, believe that there is something more to Maurice's ravings than delirium tremens alone. Obsessed by the concept of death and the exciting prospect of inner peace and immortality assured by Underhill, Maurice overlooks the single and most important thing in his life - and in Underhill's death - something very precious which Underhill had contrived to take from him at the outset. The true horror of Underhill is then revealed.
Actors:
Albert Finney, Linda Marlowe, Sarah Berger, Nicky Henson, Josie Lawrence, Michael Grandage, Natalie Morse, Michael Culver, Robert Schofield, Michael Hordern, Nickolas Grace, Sandra Caron, Brian Greene, Anna Skye, R.J. Bell, John Burgess, Philip Franks, Peter Treganna, Glen Lee, Elizabeth Digby-Smith
Directors:
Elijah Moshinsky
Producers:
David Snodin
Writers:
Kingsley Amis, Malcolm Bradbury
Studio:
BBC
Genres:
British Films, Horror, TV Classics, TV Comedies, TV Horror
Countries:
UK

Reviews (1) of The Green Man

Ignore the synopsis on the main page written by somebody who hasn't seen the series. This rather odd BBC production is far more concerned with the sexual exploits of an alcoholic restauranteur than the ghostly goings-on its target audience probably tuned in to see. In many ways it resembles one of those movie adaptations of short stories in which the supernatural content can't be stretched to anything like two hours, so it gets rationed out in little dribs and drabs between huge wads of padding in which two people fall in love, or some other people debate the reality of improbable things the viewer already knows are definitely real even if the characters don't. Though since the series was based on a full-length novel by Kingsley Amis, presumably everything in it was already present in the source material.

Although the very first scene gives us a creepy, gory foretaste of the horrors to come, the remaining 150 minutes deliver extremely little of what we were promised before the opening credits of episode one, and much of what we do get is that scene repeated for the benefit of people who tuned in late. Instead, we get Albert Finney giving it all he's got as a sweaty middle-aged drunk we're supposed to believe is irresistibly attractive to women because the script says so. His extremely selfish and immature behaviour is camouflaged by making almost everybody else either a nonentity or a caricature. Some of the braying morons who frequent his jumped-up gastropub wouldn't be out of place dining at Fawlty Towers; his daughter-in-law, the one person who believes him, is such a new age cliché that every single thing she says or does is brain-dead neo-hippie twaddle; and the trendy vicar who tries to be a modern Christian by openly disbelieving practically all of his own religion would be perfectly at home debating theology with three Irish priests called Ted, Jack and Dougal.

If I'm making this sound like a comedy, that's because a lot of it essentially is one. In-jokes abound, from Finney seducing a woman by describing food in a (supposedly) sexy way, harking back to the most famous scene in his 1963 breakout movie "Tom Jones", to the casting of Nicky Henson in a fairly major rôle because he was in lots of sex and horror trash in the seventies. Frankly, it feels smug, and the genuinely scary moments juxtapose very awkwardly indeed with scenes of impossibly stupid and rather camp vicars casually telling their parishioners what a load of old tosh most of Christianity is, or an irrelevant and obnoxious character with the surname Burgess suddenly appearing for no reason other than to show the world what Kingsley Amis thought of another author with a notoriously vast ego.

The supernatural elements are (mostly) effectively handled, but there aren't enough of them, and the concept of a hero who may be seeing things because he's an alcoholic doesn't work very well when it's made as unambiguous as it is here that the weirdness is all literally true, except for one slightly silly genuine hallucination that happens far too late in the tale to make the viewer doubt the reality of everything else. As a traditional ghost story minus all the filler about our hero's amorous antics and so on, it's about the right length for one fifty-minute episode. Stretching it to three requires one hell of a lot of stuffing. And by the way, if you think deus ex machina plot devices are cheating, this story involves such an outrageously literal example that it has to be yet another of the author's little jokes! In the end, the whole thing stands or falls on whether you believe in and/or like the main character, which has a great deal to do with how brilliant an actor you think Albert Finney is. My answer to all of the above is "not really", so it didn't work for me.