Rent The Happiness of the Katakuris (2001) 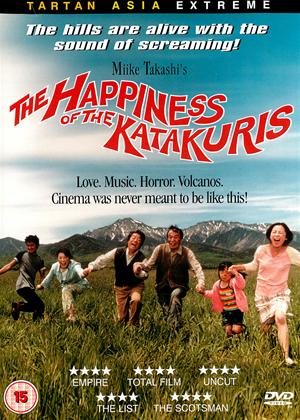 Synopsis:
One of the most original and innovative films of recent years, 'The Happiness of the Katakuris' combines the most unlikely of genre elements to create the most highly unpredictable and truly unforgettable film of all time! The Katakuris are an average family whose dream is to own a successful country inn. But soon things begin to go wrong and all of their guest begin to drop dead in the most bizarre of circumstances. Desperate to ensure the success of their business, they agree to keep the deaths quiet and resort to burying the bodies in the forest behind the house...
Filled with surreal musical numbers, disturbed animated characters, killer zombies and an array of gruesome deaths, this delirious black comedy has to be seen to be believed.
Actors:
Kenji Sawada, Keiko Matsuzaka, Shinji Takeda, Naomi Nishida, Kiyoshirô Imawano, Tetsurô Tanba, Naoto Takenaka, Tamaki Miyazaki, Takashi Matsuzaki, Yoshiki Arizono, Chihiro Asakawa, Masahiro Asakawa, Ken'ichi Endô, Moeko Ezawa, Mutsumi Fujita, Akiko Hatakeyama, Yumeki Kanazawa, Shôken Kunimoto, Maro, Aya Meguro
Directors:
Takashi Miike
Producers:
Hirotsugu Yoshida
Writers:
Ai Kennedy, Kikumi Yamagishi
Aka:
Katakuri-ke no kôfuku
Studio:
Tartan
Genres:
Comedy, Horror, Music & Musicals, Sci-Fi & Fantasy
Countries:
Japan, Comedy, Horror, Music & Musicals, Sci-Fi & Fantasy

Rent other films like The Happiness of the Katakuris

Reviews (1) of The Happiness of the Katakuris

The Happiness of the Katakuris tells the story of the Katakuri family. After the father of the family leaves his job as a department store shoe salesman, the family decide to make a fresh start by opening a bed and breakfast in the mountains. However, the place seems to be cursed with bad luck as their guests mysteriously die soon after checking in. Though the Katakuri Family are not at fault, rather than running the risk of bad press for their new business the family decides to keep the deaths a secret and hide the bodies in the surrounding woods. The only way I can describe this film is that it's like a bizarre cross between 'Monty Python' and 'The Sound of Music'. Stylistically the film follows absolutely no conventions; it effortlessly switches between dark melancholy, romance, adventure, horror, mystery, singing, dancing, comedy and animation. Takashi Miike directs this film beautifully, setting completely inappropriate scenes to music and dance. In one particular scene, the discovery of the suicide victim breaks out in to a terrific song, and his burial is choreographed to music, with the sound of dirt being placed on his body functioning as a snare drum. This film will naturally be way too bizarre for most people, but if you are a fan of weird Japanese movies, then this is must see stuff!