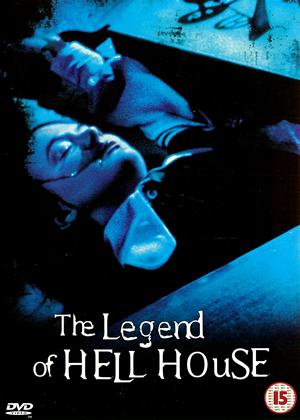 Synopsis:
It sits there, shrouded in mist and mystery, a nesting place for living evil and terror from the dead. It's Hell House. Roddy McDowall heads the cast of this exciting chiller about four psychic investigators and the dark, brooding mansion they themselves call 'The Mt. Everest of haunted houses.' It's already destroyed one team of researchers. Now this brave quartet ventures in for another try at unravelling its secret. But before they succeed, they must suffer through madness, murder and everything else the spirits that dwell here in store for them. Yet learning the truth just might drive them all insane.
An ingeniously-devised ghost story, The Legend Of Hell House will thrill and delight veteran horror fans from the first creaking door to the very last slithering shadow.
Actors:
Roddy McDowall, Gayle Hunnicutt, Pamela Franklin, Clive Revill, Roland Culver, Peter Bowles, Michael Gough
Directors:
John Hough
Writers:
Richard Matheson
Studio:
20th Century Fox
Genres:
British Films, Classics, Horror
Countries:
UK

Rent other films like The Legend of Hell House

Reviews (1) of The Legend of Hell House

I can't honestly call this film "good" in the conventional sense. The directing is terrible, with very poor pacing and every "shock" telegraphed far too long in advance, Gayle Hunnicutt is a waste of space apart from a couple of scenes where she gets to go nuts (when there are only four significant characters who aren't invisible ghosts, it's just plain careless to seriously underuse one of them), and Roddy McDowall manages to give a masterclass in overacting in a movie where nothing and no-one is exactly understated.

But hey, it's a lot of fun! Basically, it's "The Haunting" with all the subtlety replaced by things which might appeal to people who had just seen a ground-breaking new movie called "The Exorcist", though without having the courage to go anywhere near that far. Still, we do get sex-crazed ghosts, an abundance of spiky objects flinging themselves at our heroes, possibly the most extended scene ever in which the ultimate manifestation of satanic evil is represented by repeatedly throwing an understandably annoyed cat at some long-suffering actress, completely bonkers "science", and undoubtedly the silliest method of defeating a seemingly omnipotent supernatural force in the entire history of cinematic ghost-busting.

Pamela Franklin as the Linda Blair substitute comes out of it with the most credit, but Clive Revill (whoever he was) plays a character so unlikable that when, quite early in the film, the poltergeist attacks him with just about everything in the room that could possibly inflict damage, you'll definitely be rooting for the ghost (unfortunately its aim is lousy). And Michael Gough has such an unrewarding rôle that he probably had more fun that time he had to flounce about in pink satin as the king of the Moon. Still, second-rate though it is, it's certainly not dull. And Roddy McDowall heroically trying to render his lines audible while leaning into the blast of a wind machine turned up to 11 is a sight to behold!