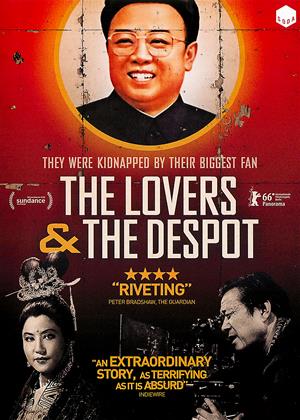 Synopsis:
"The Lovers and the Despot" is a sensational documentary that tells the shocking true story of one of Korean cinema's most tightly kept secrets. Following the collapse of their glamorous marriage, a celebrity film director and movie star are kidnapped by movie-obsessed dictator Kim Jong-il. During several years of captivity they are forced to make films in the world's most closed state, where they get a second chance at love but only one chance at escape...
Actors:
Paul Courtenay Hyu
Directors:
Ross Adam, Robert Cannan
Producers:
Ross Adam, Robert Cannan, Natasha Dack
Writers:
Ross Adam, Robert Cannan
Studio:
Soda Pictures
Genres:
British Films, Documentary, Drama, Thrillers
Countries:
UK

Rent other films like The Lovers and the Despot

Reviews of The Lovers and the Despot

The Lovers and the Despot review by Adrijan Arsovski - Cinema Paradiso

A story stranger than fiction - The Lovers and the Despot is a documentary feature involving the hermetically sealed North Korea in a hijacking opera starring the Dictator Kim Jong-Il himself, a South Korean ex-couple consisting of a movie star and a world-class director, a mistress, intelligence and counter-intelligence and the involvement of several US citizens in the most strange way possible. The events depicted are hardly believable, but probably mostly true (with few exaggerations) that will leave everyone’s skin high on pins and needles without consuming a psychotic drug.

The whole film is shrouded in mystery due to the lack of information as to what exactly happened to these people which stories we see. However, the basics are there: Kim Jong-Il was a film buff whose favorite features included USA film franchises James Bond, Rambo and even Friday the 13th. So naturally, since North Korea didn’t have a production house at the time, Kim vehemently decided to ‘steal’ two of the best working professionals who happened to be the nearest at the time (South Korea) and make one of his own. This would be the general outline The Lovers and the Despot tries to uncover, and does so with due diligence.

As director Shin Sang-OK gradually started cooling off relations with her wife at the time – actress Choi Eun-hee, Kim was fast to intervene in order to reconcile their differences in the matter. Of course, this is not what truly happened, but inevitably lead to the same outcome – the two of them rekindling their mutual passion toward one another, with Kim acting as the unintentional ‘mediator’ (if kidnapping counts as such).

The story takes place in 1978, and is told through several very different vantage points, including the British intelligence and their research into the couple’s kidnapping; a certain Japanese film critic who assisted Shin in transporting a letter; the South Korean police that investigated the sudden disappearance; and of course, the focal points of said Choi as she recounts her memories with both nostalgia and a feeling that it won’t happen again. Meanwhile, audiences get the rare chance to peak under Kim’s authoritarian reign with the help of some tapes caught in secrecy by the kidnapped South Korean couple, while residing within the walls of the tyrannical ruler.

The Lovers and the Despot maybe focuses too much on archive material for its own sake, and at times it can get a tad bit repetitive, but in the end – it’s all worth it. After all, who can brag about stealing the voice of Kim Jong-Il and seeing the light of day to tell about it later? Probably not many such exist, but one who was a former adviser for the despot himself also gets his voice heard in the feature.

The Lovers and the Despot leaves many events enveloped in mystery, since there is scarce data about what took place and who betrayed whom among the sea of North Korean spies and unlikely defectors.

However, the film won’t leave you indifferent: and that is for sure.