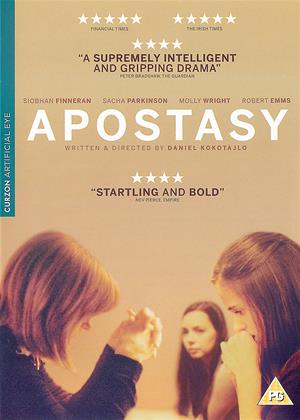 Perhaps because of my negative bias, I would've expected a film written and directed by a former Jehovah's witness to be angry. But this is a film which is an honest and empathetic look at the experience of being part of a little understood religion.

It's not perfect.. It does feel a bit contrived in places. Conversations between believers and non believers are very much done for the audience's benefit, as an explanation of the religion, rather than as naturalistic scenes. And the two significant plot points, together in one film, do threaten to take the movie into "issue of the week" TV film territory. But the strength of the performances, plus the effort the film goes to humanise every aspect of the religion, gives its an urgency and potency that is never less than gripping. And its authenticity is undeniable. I really liked it!

This is a really good film, giving a rare insight into the JW movement. The acting is absolutely brilliant, and the whole endeavour has a really authentic feeling to it. The whole thing is totally gripping and at points excruciatingly difficult to watch- but so well worth it!

Apostasy succeeds in what it sets out to do: to show the dilemma a Jehovah's witness family face when it comes up against the harsh reality of life. The mother, brought up as a witness and a staunch defender of it, realises the price she has to pay when one daughter dies for lack of a blood transfusion, and the other deserts her for not saving the daughter, her sister.

The film deals with some weighty personal issues in the context of young girl's adherence to the rules of the Witness Movement but in an agonisingly slow and low key manner. Some might find it revealing. It certainly isn't a Witness Movement recruitment film. A good effort for what it is perhaps.

Kitchen-sik-style TV drama as it used to be, here as a state-subsidised film - Apostasy review by PV

OK so this film is educational - it shows what happens in Jehovah's Witness churches or whatever they're called - one is down the road and the Jehovies are always out recruiting by the local shops. I remember a girl at primary school was one too - no Christmas, so she left the main hall whenever there were carols sung.

But really, why is this a film for cinematic release? The funding is from our taxes via the BBC and Film England and the lottery. But this is ideal TV drama territory really - it reminded me of the old TV Play for Today, where writers such as Dennis Potter started out.

All interesting up to a point, but no further. It's just not cinematic! 2 stars

A window into a bizarre religious group - Apostasy review by PB

Mind control and brainwashing are all grist to the mill of religious cults, as is the policy of marrying only within the cult and a system where those who question or reject the cult's beliefs are then isolated and shunned by the membership. In Jehovah's Witness territory this alienation of those who transgress is called "disfellowship". I found this film authentic and sad. Great acting and a moving story.