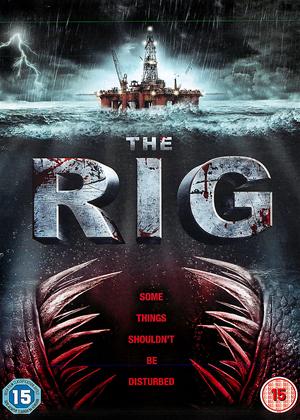 Synopsis:
As a hurricane rages outside, the small but experienced crew of a deep-sea oil drilling rig settle in to ride out the storm. Isolated on the rig and a hundred miles from shore, their calm is short lived when a crew member goes missing and an extensive search proves futile. Slowly, they discover that a deadly creature is stalking the skeleton crew, eliminating them one by one. Surrounded by nothing but raging ocean, their communication severed and no way off the rig, the roughnecks try to survive the stormy night with an unrelenting force of death hunting them down.
Actors:
William Forsythe, Stacey Hinnen, Serah D'Laine, Marcus T. Paulk, Carmen Pérez Røsnes, Daniel Benson, Robert Zachar, Scott Martin, Darren Scott, Eric Bivens-Bush, Jacob Bruce, Dennis Lavalle, Art LaFleur
Directors:
Peter Atencio
Writers:
Scott Martin, C.W. Fallin
Studio:
Kaleidoscope Home Ent.
Genres:
Horror, Sci-Fi & Fantasy, Thrillers

The idea of something monstrous loose on a storm-lashed oil rig is a very appealing one. A more remote, dangerous outpost it is difficult to imagine. Director Peter Atencio makes good use of a clearly low budget and ushers in a moody and claustrophobic atmosphere, fills it with a gruff working crew, and Writer CW Fallin brings them to life with some often witty dialogue. This, I always think, is the key to a level of success that belies budget – make the characters appealing (or most of them, at least) and the audience are affected by what happens to them.

What happens to them is a fairly impressive series of death-by-monster. Many of these attacks are genuinely shocking, not so much in their execution – which is fine but hardly spectacular – but in the way they occur at the least expected moments.

It’s disheartening to see a fair amount of negative online reviews for this. It doesn’t take someone as insignificant as myself to point out that everyone is entitled to their opinion, but it would be a shame to think that people slate this purely because of its low budget – which, on the evidence here, isn’t THAT low. The insulting ‘anyone who votes this more than one star is in some way associated with the movie’ is a very narrow-minded and untrue viewpoint.

It plods in places, and the finale is somewhat protracted, but there are some impressive directorial flourishes that further compound the remoteness of the location. This Alien-like horror run-around won’t change your life, but I thoroughly enjoyed it.