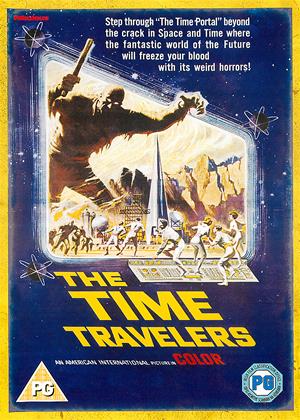 Reviews (1) of The Time Travelers

This typically trashy sci-fi quickie from AIP, the studio that gave us a million Roger Corman movies, gets off to a no-nonsense start as three scientists - the oldest, wisest one with the beard and monocle, the younger fellow who thinks he's Charlton Heston, and the token woman - invent time-travel by mistake in 1964, and thanks to the antics of the inevitable obnoxious comic relief character, soon find themselves trapped in the post-nuclear wasteland of 2071.

Unfortunately, it's downhill all the way from there. Some not too bad special effects are wasted in a movie which spends over three-quarters of its running time giving us little more than a guided tour of a threadbare future world where, judging by the incredibly annoying background music, the manufacture of robots, which we are shown at great length, is considered hilariously funny. The mild but undeniable sexual innuendo in a few scenes, and the modest amount of blood present during the fighting that eventually breaks out after an hour of talk interspersed with demonstrations of oddly primitive-looking "futuristic" machines, suggests that this movie wasn't intended for children, and I think most children would get extremely bored waiting for something to eventually happen, but it comes across as rather childish most of the time, with occasional outbreaks of pretentiousness.

Clearly ripped off from "The Time Machine" (1960) only with a much lower budget, and therefore much less impressive mutant makeup, it doesn't seem to know where it's going at all. Almost nobody except, alas, the horrible "funny" character you wish will die but you know isn't going to gets any character development. The token female scientist's big moment, when she pleads for the life of a harmless, innocent mutant played, rather disturbingly, by a genuinely deformed person, seems to be making an important moral point, yet neither that scene nor the character introduced in it are ever mentioned again. And it's anybody's guess what the ending is supposed to mean, since it appears to imply that the surviving characters are miraculously saved but maybe something very bad also happened. Probably they just threw a load of random weirdness into the script because hey, time travel!

With a better script it could have been a fascinating oddity, but unfortunately it plays out like a very early "Doctor Who" serial with a much higher budget than usual, but with all the cliff-hangers edited out except the one in episode four, and of course missing the Doctor. It means well, but it suffers from a woefully sluggish pace, "comedy" so unfunny you wouldn't know it was there if the music wasn't telling you to laugh, and a total absence of characters you actually care about. Of historical interest only.