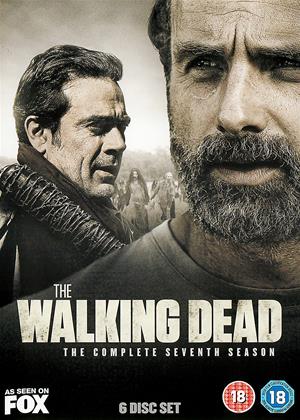 Reviews (2) of The Walking Dead: Series 7

The first episode is generally unsettling and of course the audience will be waiting to see who Negan is going to club about the head with "Lucille" which gradually gets introduced throughout the episode. The resultant deaths are pretty graphic and unfortunately a general air of hopelessness will pervade this particularly bleak, gritty and intense episode.

The 2nd from memory is extremely quirky. You will have to suspend disbelief along with Carol as she meets her new "captors". There is a fair bit of humour in this one but Carol is extremely watchable as a character and perhaps it could be said that the audience needed a bit of reprieve from the 1st episode's intensity.

The 3rd episode helps us learn a bit more about The Saviours - Negan's gang. As if we didn't know already we start to understand just how nuts Negan really is and how unlikely it will be for Rick's group to deal with him long term. This episode focuses on Daryl and we see just how steely his resolve is to follow his code of honour.

In all pretty good. As in previous series the Season has to start by pulling back together the story threads left behind from disbanding the characters - i.e. the prison and Terminus. I would give this disc 7/10 rating.

Still good but getting bit slow - The Walking Dead: Series 7 review by gazmb

Really enjoyed the series right from series one. This starts very good but does get a bit slow. The series is starting to lose momentum

The Walking Dead found the perfect capper to season six to make its viewers return in droves for the season premiere. After introducing the new villain of Negan, played perfectly by a grinning Jeffrey Dean Morgan, there was one question on everyone’s mind: Who does Negan kill first? The sixth season ended with the perspective of him killing someone, but we don’t know who bit the dust. And once we finally see who received the bad end with Negan’s iconic bat built for bloodying, it is indeed shocking.

While opening with such a great shock, the rest of the season almost appears underwhelming. Perhaps it comes from how much weirdness follows with establishing new factions of the wasteland. Carol runs across the king-fancying role of Ezekiel, a former zookeeper who establishes the kingdom. With his many dreads, his Shakespearean talk of maintaining the piece, and having a tiger by his side at all times, he comes off so cartoonish that Carol can’t help but laugh. Just look at that computer-generated tiger and try not to laugh. Another faction that comes about is the Scavengers, a junkyard dwelling collective run by the artist-looking oddball of Janis (Pollyanna McIntosh). Oh, and there’s an Oceanside faction which is saved up for next season since this one is already crowded.

The added personality of Negan as the new taker of the land is a strong addition to this season, but he almost seems buried everything else going on as the series struggles to spin its many characters, shuffling the deck to see who will die next. But at this point, the deaths, creatively gruesome as they may be, start to wear thin when piling up in such frequency with Negan’s new reign. After six seasons, it’s more like a revolving door of cast members, introducing the new ones and killing old ones off is a tone that is hard to shake when analyzing the series all in one go. And it becomes so obvious who is next when they’re given one final send-off of an episode, despite some mild shockers of surprise throughout, including one character losing a body part and surviving.

Still, the season has its little bits of pleasing growth. It’s nice to watch Carol come back out of her loner shell as Ezekiel gently takes her into the flock. At the same time, it’s interesting witnessing Malcolm descend back into the madness that once claimed him, finding only violent nihilism awaiting him in the fields of gunfire and zombies. And it’s at least refreshing to see the leader Rick be knocked down a few pegs when he realizes he may have met his match Negan, an opponent that’s going to require more than a sharp machete to deal with.

And what about them zombies? They’ve been reduced to an element of nature so common that besting the herds is like preparing for the weather. They’re also easier than ever to slay considering Rick’s old standby of leading a herd towards his enemies isn’t always so effective. By this point in the show, a full-on zombie overtaking is almost quaint when dealing with the likes of Negan and his unstoppable militia.

So while The Walking Dead may still have a few miles left in the tank, you can certainly see it sputter as the gears grind with too many characters and not nearly a high enough episode order to fit them all. The season has its fair share of shocker moments and even some strange developments that become intriguing at times, but after such a stellar opening episode, you find your interest plateauing quickly for a show too crowded for a character such as Jeffrey Dean Morgan to strut his stuff. One hopes he could move in on more territory for the next season to become the highlight he deserves to be.