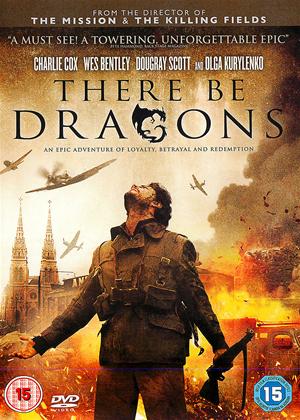 Reviews of There Be Dragons

There Be Dragons review by Melissa Orcine - Cinema Paradiso

By mere title alone, you would think ‘There Be Dragons’ is an epic tale of mythical proportions, knights battling huge creatures, and unbelievable feats of humanity.

There’s none of that; it’s actually a biographical screen adaptation of the life of Catholic organization Opus Dei founder Josemaria Escriva, directed by Roland Joffe (whose last religious film was 1986’s ‘The Mission’ starring Robert De Niro and Jeremy Irons) using the Spanish Civil War as historical backdrop and a rivalry between best friends that serve as its dramatic hinge.

Unfortunately, with a myriad of genres to cover, ‘There Be Dragons’ becomes a quilted piece that has no focus and results in ambivalence amongst its audience.

Actor Charlie Cox shows the good-natured personality of Josemaria Escriva to the point of unbelievable proportions. Of course, it has to; Escriva was canonized as a saint in 2002 and we must show due diligence of his portrayal. His sainthood and organization Opus Dei have been the subject of many controversies of late, but ‘There Be Dragons’ highlights the naturalness of Escriva’s ascension to sainthood.

An attempt to give the film gravitas is Escriva’s rivalry to a boyhood friend named Manolo (Wes Bentley) – and it’s short on arch-enemy specialness. Manolo is the only malicious one; Escriva is clueless of his seething hate and does nothing about it. Escriva is so good that you find it obnoxious that Manolo could be this vindictive when his rival is just passive. This isn’t exactly what we expect from a personal feud.

The usage of the Spanish Civil War in film is totally for production value only plus the cinematography does save the film. Beyond these, film does not have a point and has no intention to make one.

Director Roland Joffe has done great before, his 1984 film ‘The Killing Fields’ about the genocide of Pol Pot’s own people in Cambodia, is one of the most riveting works ever on celluloid. These days, Joffe is falling on the wayside, making mediocre-at-best films.