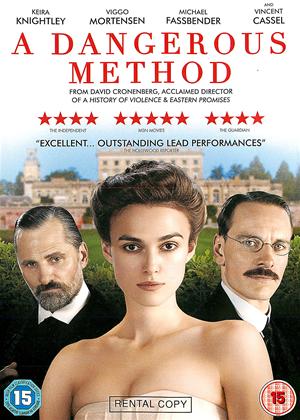 Reviews (1) of A Dangerous Method

A dialogue-heavy drama about the relationships between Freud, Jung, Jung’s wife and the female patient he becomes involved with. Some emotional jumps in character are hard to take and, like most David Cronenberg films, it’s in no rush to get anywhere. Nevertheless, if you’re looking for a solid, efficiently-told Sunday-night drama with interesting subject matter, this will fit the bill for 95 minutes.

A director better known for his often painfully visceral horror David Croenberg takes Kiera Knightly, Michael Fassbender and Viggo Mortensen on an intense and investigative journey through the lives and theories of psychologists Carl Jung and Sigmund Freud.

The film tells the story of a young medical student (Knightly) who has a mental breakdown and finds herself in the care of Dr Jung (Fassbender), using methods developed by his idol and mentor Sigmund Freud (Mortensen) Jung makes significant progress with Knightly’s characters Sabrina; however he can’t help but be drawn to his subject and the two begin an affair. When Freud’s of the relationship between Jung and his patient he holds the information over his inferior’s head, forcing him to re-evaluate his more mystical and supernatural theories.

A Dangerous Method is incredibly well staged; all the performances are of a high quality, whilst the aspects of the costume drama genre are indulgent and sumptuous. What the film is not however is emotive; the characters are all fairly cold and as such encouraging very little emotional connection with the audience. The movie is certainly an interesting and intriguing investigation of the lives and works of Jung and Freud, which handles the intellectual and often complex theories with a straight forward ease that allows any intelligent viewer to sink into them without even noticing.

This is all to the movie’s praise of course and as such it remains an interesting and relatively enjoyable experience; I would not call it entertaining however and would expect a considerable amount of bribery before I would be willing to watch it a second time.