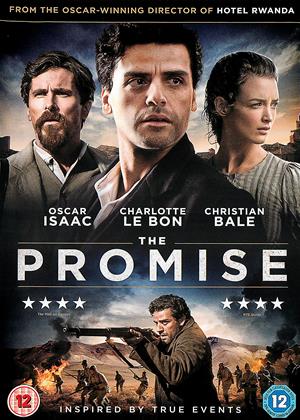 Reviews (9) of The Promise

Ok nothing more - The Promise review by SR

Considering the acting talent and the historical background, this was nothing more than a middling film.

Fantastic epic type of movie, love the ottoman style and great characters. good locations and you really feel the joy, pain , sorrow of the characters. well acted and highly recommend this to people who love an epic movie.

A great, thought provoking film. The Armenian genocide by Turkey during WW1 is not widely enough known. Because the Turks 'got away with' murdering 1.5 million people - it led directly to the Jewish holocaust in WW2. It is also a very touching love story. It is presented in big scale, Holywood style. A must see.

Important film recounting the 1.5 dead in the anti-Christian genocide by Turkish Muslims in 1915 - The Promise review by PV

When Hitler was ever asked about his persecution of the Jews and sending many millions to death camps, he responded "Who now remembers the Armenians?" And he's right. This vile genocide by Muslim Turks of Armenian Christians, in the name of nationalism and religion, is an ugly stain on the reputation of Turkey, especially as it does not even acknowledge it took place.

I found the film really interesting, if a bit plodding - and of course there's the love interest etc which takes up too much time.

I look forward to more movies being made which tell the stories of those who perished in the anti-Christian massacres by Muslim Turks in 1915 - though seeing as the USA is cosying up to Turkey as a bridge between east and west, don't expect any criticism by presidents or politicians.

This is FAR too important to ignore - unlike all the silly #metoo moaning movies, this film shows REAL abuse that people are right to call out and remember.

Star-crossed lovers play will-they/won’t-they against the backdrop of Armenian genocide in Turkey during WW1. The aching score sets the mood and there are moments both poignant and exciting. However, the film wears its earnestness on its sleeve and in places becomes burdened with its message. It aims for an epic quality but is perhaps best judged on its parts rather than the sum of them. If you’re in the mood for a good wallow, it’s a smoothly filmed piece of entertainment with a message worth airing (Turkey denies the outrage to this day).

This important and relatively unknown story deserved a better platform than this film. I will admit though that it was beautifully filmed and featured some stunning locations. The character Michael (Oscar Isaac) was so unnecessarily ridiculous that it took away from the real horror of what happened. You start off thinking he's ok and then slowly he detracts from the film as you end up shouting at him and not caring whether he lives or dies. This was a wasted opportunity and a rather painful watch for all the wrong reasons.

Lacked the Impact the Story Needed - The Promise review by KW

Interesting concept to centre a film around the genocide of the ARMENIANS in1914/15 at the hands of the TURKISH. The problem was too many interwoven story lines, that made it difficult to fully understand just what was happening, and why it was! Visually good to look at and the location shots were excellent.

Lives up to its promise - The Promise review by AB

Ostensibly a true story of three families and a triangular romance (comprising the excellent Oscar Isaac, Christian Bale and Charlotte Le Bon) against the backdrop of the attempted ethnic cleansing of their Armenians by the Ottoman Turks. Assisted by the Germans at the onset of the first world war (yet still denied by the Turkish authorities), these events rarely get aired today.

The photography and the build-up to the atrocities is superbly handled, with a nicely paced story in the foreground. Well worth watching to remind ourselves who came to the Armenians assistance, at least in this episode.