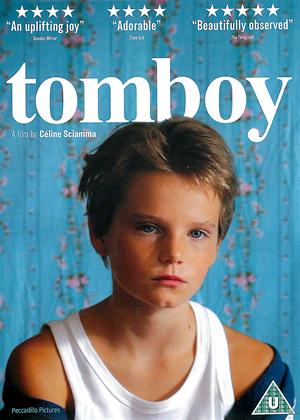 The main character Laure/Mikel is a wonderful actor. The film captured what a young person having gender issues must go through. My only criticism is that the pacing was a bit too slow, but I understand that the director intended this to emphasise how things evolved for Laure in her new skin.

Laure (Zoe Haran) is a 10-year-old girl who has just moved into a new apartment complex with her busybody father, pregnant mother, and six-year-old sister. Although Laure is biologically a girl, she looks like a boy, what with her short hair, lean body, and gravitation to any boy activities such as football.

When Laure meets a fellow yet pretty girl named Lisa (Jeanne Disson) her interest is piqued and develops a crush. Her name is asked but she gives a boy one – Mikael – and from there on, Laure has been a boy. This is the French film ‘Tomboy’, the second feature from director Celine Sciamma. If in her debut film ‘Water Lillies’, she tackles the discovery of sexuality among 15-year-old synchronized swimmers, this time it’s Laure/Mikael, a much younger child who starts to distinguish her/himself as the gender she/he wants to be.

‘Tomboy’ examines if gender especially among children is in-born or acquired; a sort of conditioning depending on the people he/she meets and the environment he/she lives in. But director Sciamma’s film does not exact seriousness with her very young cast or even the subject matter.

Her camera follows Laure on her day-to-day without much comment; just a presentation of evens at times hilarious and cute, especially the natural interactions of the children with each other. The kids are being kids – they are still welcoming, curious, and non-judgmental. The relationships Laure/Mikael forms are interestingly expected and make for fun scenes. It is also wonderful to note that Laure/Mikael’s younger sister is very accepting, an unconditional love that is undeniable and heartwarming at best.

The film is shorter than expected but it’s enough to open eyes on how children recognize themselves as they grow older. As adults, we assign certain expectations how girls and boys dress, act, and go about their lives. With children, they are only expected to be kids and only once adults intervene do they imbibe certain norms that don’t really apply to them yet. Besides, what is a ‘tomboy’? Does she remain a tomboy forever? Does she revert to the body that she was born with?