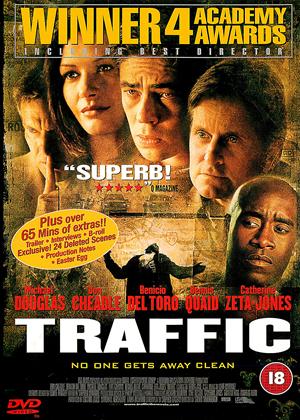 This complex film tells 4 overlapping stories about drug trafficking across the US-Mexican border. The director has 'colour coded' each story so that as each thread unfolds, you can tell which one you're following. Confused? Not really – it's just one of director Steven Soderbergh's ideas.

The 1st story follows the newly appointed US 'drug czar' played by Michael Douglas. Unfortunately his good intentions are undermined (a) by the scale of the problem and (b) by the fact that his 16 year old daughter is experimenting with drugs, becoming an addict, and descending into prostitution.

The 2nd story follows a corrupt Mexican cop (played by Benicio Del Toro) as he receives money for information on rival drug cartels, turns a blind eye to assorted dodgy practices, and eventually cooperates with the US authorities.

The 3rd story follows the wife (played by Catherine Zeta-Jones aka Mrs Michael Douglas) of a major drug dealer as she establishes herself as head of his empire when he is under arrest.

The 4th story is of two DEA agents who arrest and are then responsible for protecting a drug dealer as he prepares to give evidence against his boss.

Good film – but it's a remake of the Channel 4 TV series 'Traffik' and despite awards, it really isn't as good. The best acting in my opinion is in the 4th story from one of the DEA agents played by Luis Guzman. And frankly, Catherine Zeta-Jones is too wimpish to give a convincing portrayal of a ruthless woman aiming to run a major drug dealing operation.

Recommended – but I can only give it 3/5 stars.

Director Steven Soderbergh's most accomplished film and a powerful one at that. A brilliant study of drug trafficking in modern USA through three main and separate storylines that don't specifically interconnect during the film but there are key links between them to give an overall structure and thematic idea to the film. One stream follows Mexican cops Javier (Benicio Del Toro) and Manolo (Jacob Vargas) who target drug traffickers attempting to move vast quantities of cocaine across the border into the US. They are honest but their success brings them to the attention of General Salazar (Tomas Milian) who is the top drug enforcer in Mexico but who also has plans for himself. The second concerns conservative Judge Wakefield (Michael Douglas) appointed by the President to lead the US war on drugs but he has to learn new lessons when he discovers his privileged young daughter is an addict. The third follows the DEA investigation into Carlos Ayala (Steven Bauer) who is the biggest trafficker in San Diego but appears to be a respectable businessman. When he is arrested his naïve wife, Helena (Catherine Zeta Jones) is forced to take over the business. All of these storylines are grittily and realistically told with a documentary feel to them. Each has its own colour palette to represent the issues and locations and the film has some shocking moments including torture scenes and abrupt violence. It's a story of corruption and futility and attempts to highlight the complete nonsense in the approach to dealing with drugs at the highest levels. As a crime based drama it's certainly riveting and very, very good and whether it gets its message effectively across is open to debate but whatever your view it makes a sterling effort to highlight the problems and bring the issues into the light. The cast are exceptionally good and include Albert Finney, Don Cheadle, Dennis Quaid, Miguel Ferrer, James Brolin and Viola Davis amongst others. This is a first class film, brilliantly written, directed and edited and highly recommended if you've never seen it.