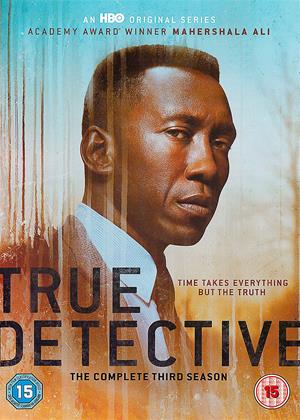 This is the most intense of the True Detective series with piercing and convincing focus on some complex personalities. As a UK citizen I needed english subtitles to understand the dialogue. Mahershala Ali gives a riveting if moody performance but his speech was the most difficult to understand. Presume this is local dialect.

The film takes place in three eras, 1980, 1990 and 2015 and the programme flits endlessly between these three time periods. The plot is complex and the characters are generally damaged goods. The central love story between Mahershala Ali and Carmen Ejogo is convincing and as complicated as most marriages are. Ejogo is cute and smart in her role. The friendship between the two investigating detectives has many ups and downs but is a subtle study of good buddies separated by race.

The plot is clever and suitably labyrinthine for a near 8 hour series. You get the impression that the whole creative effort must have been pretty draining, you cannot fault their work ethic. It certainly catches the baffling complexity of human nature and the massive ramifications a crime can have on a tight-knit rural community. Collateral damage is far more intense than the original crime.

Overall True Detective has been a compulsive and original take on the detective genre and generates a spooky and ominous milieu. Hard to forget and sometimes hard to watch.

Better than series 2, but not by much - True Detective: Series 3 review by TB

After the disappointment of series 2, I had heard good things about series 3 and was also excited by the casting not only of Stephen Dorff but of course Mahershala Ali, who had just come from winning his second Oscar for the magnificent Green Book.

But despite all the critical elements being in place, (great cast, returning writers and musicians, generous budgets,) for me, it just doesn’t work. For one thing, there is no major action scene in any of the 8 episodes, which after the masterpiece of the single cut in series 1 and the flawed but still exciting shootout in series 2, is a glaring omission. The closest we get is a bar brawl that lasts 30 seconds, which has great humour and good fight choreography, and leaves you wondering why they didn’t put a standout sequence in.

The chemistry between Ali and Dorff, and also the relationship between Ali and Carmen Ejogo is well acted, but again not enough to overcome the key issues with the series.

The squandered potential here is the worst thing, as it’s almost like there’s a fantastic series in this one, trying to get out. And at times it shows these glimmers, but doesn’t ever really progress from there. Better than series 2, but not by much.

we could not understand the dialogue. There would be 3 discs to watch . e gave up after trying 3 episodes, and understanding none.

I found all three series totally compelling. Everything well thought out. Excellent writing, directing, casting, acting. Believable, at times made me gasp. TV drama at its best. I highly recommend.

A Return to Form after the Mess of Series 2 - True Detective: Series 3 review by PV

This 3rd series is a return to form for True Detective though it's not as good as series 1; anything is better than the mess of series 2 though.

Set in 1980, 1990 and 2015, the first DVD has a features section which shows how they differentiated those parts - fascinating stuff, all to do with colour schemes and lighting.

The acting is fine, though no actor can ever really pull off playing old. I've seen worse though! Much!

The final act and part becomes rather Midomer Murders - it is so calculated and frankly not believable, But hey ho... Best not to count the plot holes or you'll run out of fingers...