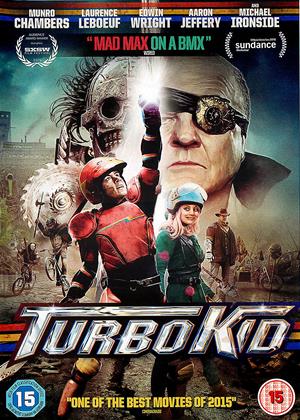 It is to the makers of Turbo Kid’s credit that within ten minutes of the start of the film I was checking the sleeve for the year the film was made. It was 2015 not 1985. This truly was a well-crafted knowing love letter.

Right down to the cheesy synth pop movie to the style of shots, even the acting, Turbo Kid just shouted 1980s from the get-go. Often with this type of pastiche the story does not hold up, the acting can be creaky, yet with Turbo Kid, the joke never wore thin.

The hilarious and so spot-on grand guignol of spurting blood, flying heads and suspiciously rubbery looking intestines were enough to shock when they suddenly popped up or even gushed out. Yet they still make you laugh with their gloriously over-the-top and senseless ultraviolence. The action was the sort of thing that would have made the 80s school kid you were squeal with pleasure and then tell all in the playground the next day.

At 91 minutes running time Turbo kid didn’t outstay it’s welcome either. although I have to say my attention was just starting to fray near the end even though the goodies, baddies and in-betweens were lining up to meet their ends, escape or be the hero.

As far as the story goes it is nonsense, just as it should be but one point I particularly loved was in this dystopian future everyone rides push -bikes, which makes sense to me, do you know how to refine petrol? Everything else is in there, revenge for the murder of a mother, an unexpected reveal for a character, the cool mysterious stranger and the evilest of evils the one and only greatest. Michael Ironside. The tropes of being a hero to yourself loving a friend who initially you mistrusted and winning the day with a sacrifice are ticked off in a competent and fun way. If you loved this type of film as a youngster, you’ll love Turbo kid.

The acting a from mainly unknown cast, to me at least, (I apologise to any Kiwis and Canucks who know them well), play their roles to perfection, the two younger protagonists Munro Chambers and Laurence Leboeuf playing Turbo Kid and Apple respectively do very well in particularly tricky roles. They have to play their pivotal characters completely straight and yet somehow give a knowing wink to is the audience, for me, this audience, it worked. Leboeuf in what could be an irritating presence had enough skill to make Apple daft, annoying, endearing, fun and ultimately tragic.

Some work there just in that one role.

Munro is Turbo Kid and his charisma carries past any flaws on the story or script. Michael Ironside and Aaron Jeffery are both experienced enough to carry their less nuanced characters with some ease and to wring out as much fun as their respective roles and presence in the film allowed.

If you into nostalgia from you misspent youth (1980s) Mad Max style apocalypses mixed in with BMX bandits channelling Kung-Fu kids with futuristic superheroes – this is the movie for you. The thing is it sounds awful but if you watched this films in your early teens you will get a kick from surprisingly well made and well-acted tribute.

Turbo Kid is fun and daft, like the original films, in fact scrub that, some of them were not this much fun.

Turbo Kid is the wonderfully colorful and bloody love letter to genre fans of the 1980’s. It will touch the heart of children who grew up watching He-Man, playing Nintendo, reading comic books and listening to anything synth. It’s a post-apocalyptic setting filled with all the delicious shlock from the 1980’s era - including its version of the dystopian future taking place in 1997. It also plays up the fantasy of what kids wanted to see from that decade with plenty of gory violence, despicable villains and heroic characters with imaginative weapons. What kid wouldn’t want to beat up bad guys with an energy-shooting glove while travelling around a wasteland on your bike?

All this may sound like Turbo Kid is a huge nostalgia fest, but it thankfully still has a heart and a story amid all its wildly satirical dressing. The protagonist of a plucky boy simply referred to as The Kid is the right mix of smart and dorky. He rides his bike across the land, documents his findings and returns with wasteland treasures to his bunker of a home. His collection includes familiar relics of cassette players and nailpolish he uses as paint. He treasures the torn and worn comic books of a hero known as Turbo Rider - almost as much as the limited resource of water he trades goods for in town.

His is a lonely life until the overly chipper Apple comes into it. She approaches every situation with a smile from beating down on wasteland baddies to being forced into a combat in a pit of death. The Kid teaches her the ways of the land in a manner that’s rather sweet considering he fashions her a weapon from a broken bat and a lawn gnome. With her off-green suit, pink hair and colorful accessories, she appears as a character ripped straight out of Jem and The Holograms. He also teams up with a cowboy with a robot arm that appears as the familiar wasteland wanderer.

Most of the characters and story elements are rather referential as well. The Kid happens upon an old facility which contains a powerful glove of a weapon, similar to that of the Nintendo Power Glove. Apple has a life meter that closely resembles that of the hearts in The Legend of Zelda. The evil wasteland warlord Zeus (Michael Ironside) appears as a classic eye-patch wearing villain controlling the water of the land. Zeus also has a Mad Max esque army to do his bidding. Purple mohawked women and skull-masked warriors comprise his military with plenty of unique weapons. The most iconic of the group is the brilliantly named Skeletron, armed with a glove that shoots out spinning buzzsaw blades.

The abundance of violence is deliciously absurd - ripped directly from the likes of Troma and Peter Jackson. Body parts fly with a cartoonishly campy tone the way heads comes off in clumps and torso separate so easily. Rarely do any of the many kills in this picture feel tiresome or simple. Just when it seems to be settling, the picture manages to surprise with a severed torso blinding somebody, a unicorn impaling someone or guts being torn out by bikes. I also admired the low budget that used to just the right absurdity. You can’t help but laugh when The Kid activates a secret underground base with those Plasma Balls that make your hair stand up with electricity.

Turbo Kid is the candy-coated, nostalgically-wondrous and a bloody fun picture that will provide endless joy to children of the 1980’s. It’s great camp, but still has a solid foundation that even those who never understood the weirdness of 80’s flicks can still enjoy its spirit. Whether seen as an homage or a satire, there’s a timeless love for its child-like imagination of R-rated shlock. It can best be described as eating ice cream for breakfast - something I always wanted as a child, but can now fully appreciate as an adult.