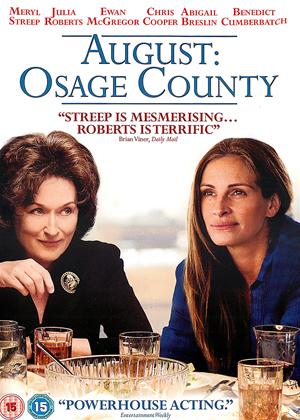 Wonderful performances from all members of the cast. Particularly fine from Julia Roberts and Meryl Streep. Excellent

The Company Men may not have been the best film but as a directorial début for long-time television producer John Wells it displayed a keen eye for talent and character as he used the backdrop of the financial meltdown to show real humanity and desperation. Wells has carried on to craft this beautiful love letter to life and family.

The film follows what happens when Beverly (Sam Shepherd) disappears one night from his home and leaves pill popping wife Violet (Meryl Streep) alone. When her daughter Barbara (Julia Roberts) returns home she must contend with her mother's wild outbursts, the unflinching eye of family and the many regrets she has come to have since she left all those years ago. However, Barbara and Violet may not be so different after all.

The film reminds me of the saying that hate is taught, that we don't come into the world seeking out people to abuse, we are crafted like weapons to do this. Not only is every character in August completely wrecked by their younger lives but by the role models that they had to follow. Violet is a reprehensible soul, a wicked woman who manipulates and tricks so that she doesn't get abandoned much like she did to her mother.

Beyond that though you can spot the glimmers of hope in these people from the idea that Barbara can learn from her mother, that Violet's sister Mattie Fae (Margo Martindale) can see what she has and not what she didn't and that Violet herself isn't as bad as her mother, although its pretty close. The film handles the films bleaker aspects with unexpected moments of levity, be it a kind gesture or a (often times rude) display of comedy.

The film is wonderfully written by Tracy Letts, it treats these people like people. In any other script Violet would be the crazed villain, the monster underneath the bed that nobody wants to talk about but Letts shows her good side and her worst in a web of different emotions. Streep shines under the spotlight yet again but Roberts is terrific as Barbara, a physical and emotional mess but an undeniably maternal presence as she tries to save people the way she wasn't, even if it all does end up blowing up in her face.

They might be a messed up family, a twisted, damaged mess of people brought together more out of obligation than of genuine affection but at least they make things interesting.