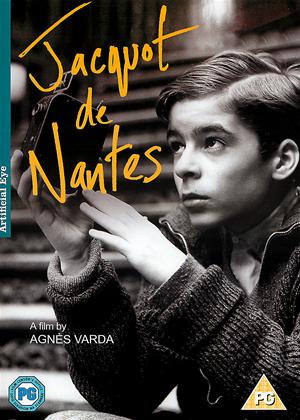 I loved this film for its portrayal of an almost idealised France which nevertheless comes across as very real. The sense of place is immediate and the actors very natural and appealing. The references throughout to Demy's films and his own presence as an adult don't interrupt the flow of the narrative at all and only serve to further one's involvement with the characters. Up there with my best cinema experiences.

The Art that is Film. - Jacquot de Nantes review by DJ

This film is amongst the elite, when it comes to the art of film making. The director adopts methods of conveying to his audience time and place, telling us whether we are about to go backwards or forwards in time.

Considering Demy and his friends were all children, the acting was truly superb and one quickly becomes absorbed in the story. The scenes surrounding the action were as real and natural as you would ever see in film, the director of photography painting with light.

This film has an element of cleverness, that breaks the rules of film grammar per se, yet works. It would never surprise me if it became a classic, given time. It is one of those pieces of work that comes together simply, due to all the elements being so well performed. The casting director did a splendid job of choice, the editing was precise and the script superb. The Director is an artist extraordinaire.

This film bears the true essence that is France alone, so-much-so that had it been made in England, it wouldn't have worked.