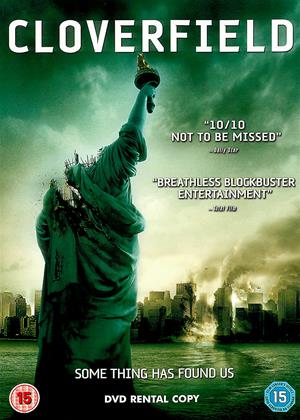 Not a classic - Cloverfield review by Rob S

A strange one this - Great idea, some very good execution with clearly a great deal of effort going into the filming - but somehow just left me a bit cold. There are some good scenes, just not enough of them and there aren't enough scary bits or shocks. The shaky camera work didn't bother me too much and kind of put you in the middle of things, but there are too many far fetched things going on here that just wouldn't happen in the real world.

Overall entertaining, but not a classic and not really worth seeing more than once.

The most annying thing is the extras as you cannot view the making of featurettes unless you watch the film and then click when the icon comes up. Really annoying trying to spot them on fast forward. I must say though that the ones I did see offered an interesting insight.

Picture quality is good but not reference standard and the sound was OK, but again nothing spectacular.

Well I enjoyed it - Cloverfield review by CP Customer

Having only seen the trailers for the cinema was interested to see what this film was like. Made me jump a good few times.

The fact that the camera is done in such a way in the 'first person' really makes you part of what's happening.

Yes could of been alot more than it is but still a dam good movie for a night in !!"!

Watch it and see your yourself

One of the worst made films in history! - Cloverfield review by CS

I saw this at the cinema upon original release and could not believe the cheek of the person who made it! The first half of the film is someone at the party filming said party on their camcorder, so you see everything through the lens of the camcorder. Then something happens, everyone rushes outside and hey presto there's loads of cars being thrown about, buildings falling down and general armageddon type mayhem. So everyones rushing around like flies with things falling down around them. The around ten minutes towards the end you see these monster type things flying around. It's that bad! There is no story line, virtually no script, no acting, poor direction and production. In fact this is so bad and cheaply made, everyone coming out of the cinema were commenting on how bad it was. Cinema goers were shocked alright, by how awful a film it was! I notice this is now in all the bargain bins in the shops, which says a lot!!

I could not physically watch these vapid characters in the first part of the film. Just way too boring. Skipped to the action. I guess the first part is to get the audience to invest with the characters; no investment I could ever make would get me to like these self absorbed morons. The film follows a group of townies who just can't cope with any situation that does not involve gossip or drinking at a bar with their buddies. The home movie maker is meant to be, I guess, so annoying that nobody minds what happens to him. Great effects but fly on the wall following a group of artificial characters with no brain cells in a crisis is just not my thing, regardless of the cuddly monster.

what could have been !!!!! - Cloverfield review by CP Customer

this film with more thoughtfully direction and better camera work,not nessecrarilly perfect,but far too much 'sloppy use' of the ''handheld'' features, would have been great even, but as it is ,its sickly,poor cgi ?? I think as couldnt see it properly, reasonoble acting, but sadly let down,buy one thing only, a ''foolishness'' in charge? of production??In my opinion.as such it fails in all areas, do not bother unless your wish is to ''test'' your skills as a viewer, to watch all in full...