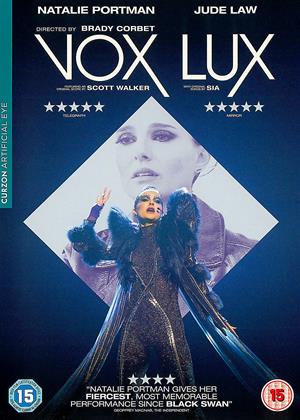 It opens with a shock but from then on it’s downhill all the way. Celeste becomes a pop singer. Fortunately we don’t have to sit through too many of the ditties she warbles, but unfortunately there’s little else going on except tons of pointless dialogue shot with bog-standard over-the-shoulder camera positions. Part I, with a teenage Celeste, is bad enough but, when Natalie Portman takes over for a thirty-something Celeste in Part 2, it’s awful. She acts her socks off in a grating voice while bonding with her teenage daughter and preparing for a concert.

Jude Law goes through the motions as her cliché of a manager, and Stacy Martin, so good in Redoubtable, is wasted as her sidekick sister. Only Raffey Cassidy, playing both the teenage Celeste and the older Celeste’s daughter, comes out of this with reputation enhanced. As for the songs, provided by Sia, well let’s just say that if you haven’t hit fast forward by the final concert, you will then.

This was ultimately a frustrating viewing experience, as this film seemed to offer so much more. It starts with a bang (quite literally), and the first half (starring Raffey Cassidy as the young lead) points towards an interesting take on the nature of fame, celebrity and the exploitation of tragic events. Despite a portentious voice-over from Willem Dafoe hinting at earth-shattering events to come, however, the film ultimately goes nowhere. Natlie Portman takes over as the older version of the lead character, and the film keeps threatening to explore interesting avenues (copycat violence, the pop star as religion), only to ultimately ignore them. Instead we get a final ten minute scene of a mind-numbingly dull arena show performance, with Portman very unconvincing in the role of Madonna/Lady Gaga-esque pop diva, some instantly forgettable songs and generic light show and backing dancers....and that's it. The film doesn't come to any kind of dramatic climax, it just stops. There are enough arty flourishes that it makes you feel like something deeper must be being explored, but ultimately it's the same bog-standard 'showbiz can f*** people up' story that's been told a million times before. Not entirely awful - a great opening, and I pretty much enjoyed most of the first half - but ultimately this story just fizzles out.

When the first trailer of this film was released it made it look like Spinal Tap for the 'Lady Gaga' generation and the second trailer was completely different to that, striking a more complex and dark tone.

A film reviewer who loved it, called it 'A Dark Star is Born', however I have to say that I was bored very early on and when Natalie Portman arrives on screen one hour into the proceedings, I basically gave up after 1hr 20 mins. Maybe I should have gone on and watched the rest of the movie however its a very dark and difficult film to watch. Intentionally so. Btw, Portman is very, very good in the role

This is an enigmatic, at times baffling and very ambiguous drama about the rise of a music celebrity. It's certainly a strange film, enthralling at times but lacks the drive to keep going and it sort of tails off into a disappointing ending. The story charts the rise of Celeste (Raffey Cassidy) who is seriously wounded in a mass shooting incident at her high school. With the help of her song writing older sister she sings a song at the memorial service for those killed and becomes an overnight sensation off the back of the tragedy. With the help of a seasoned talent manager (Jude Law) and record company agent (Jennifer Ehle) she becomes an international pop star. With a shocking opening scene this film grabs your attention and the way the young Celeste is propelled into a celebrity life is interesting and very apt. Cassidy delivers a dark and interesting performance of a girl who seems to have harnessed the violence that creates her image but when the film jumps 16 years and the adult Celeste (now played by Natalie Portman) is struggling with substance abuse and her life in general the film sort of takes a nose dive in dramatic punch. A further violent, national event seems to have relevance here but the theme is not explored to its full potential and the extended concert scenes offer nothing to the narrative. It's difficult to see what we are meant to deduce from Celeste's life other than to remark and compare on actual celebrities like here (Madonna is the obvious one as there are some scenes reminiscent of her from In Bed With Madonna - 1991). So much of the film rested on where this young girl's life was heading but when we get there the film seems to have run out of the electricity needed.