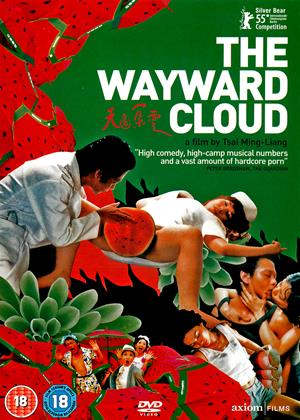 Not released
I Don't Want to Sleep Alone

Not Your First Tsaime - Wayward Cloud review by MN

I suspect that The Wayward Cloud is not a film for everyone. Part-musical, part-screwball comedy, part-drama, part-tragedy, the film is an unhinged work lacking restraint and is, probably, the most 'risible' film out of Tsai Ming-Liang's catalogue so far - to quote Slant Magazine.

His characters don't produce (or at least show) many emotions but they seem happy at having found somebody to share their time with and this is especially the case when sex becomes involved. This is a major theme of the movie and there's a constant juxtaposition between healthy sex and the porn industry. The opening shot of a man pleasuring a watermelon (a symbolic watermelon) will confuse many but it becomes clearer over the course of the film that Tsai's point is to poke fun at the strangeness of the entire industry. Also present is the usual symbolic use of water; now scarce, in its placed is a fetishisation for Watermelon Juice - this I personally chose to see as a way of deconstructing product fetishisation.

Maybe this seems off the mark, but it's definitely a film with plenty of intentions, many of them lost in a sea of oddities. It's often quite hard to place where the film is going and while at times I was laughing hysterically, other points I was honestly bored rigid. At one point, near the end, I almost turned it off completely but I'm happy I didn't because the film's final stretch is perhaps the most conventional narrative part - even if the ending is rather abrupt, shocking, and squelchy.

Above all, The Wayward Cloud demonstrates a languid, almost dream-like narrative, that is as subversive as it is reflective. Fans of Tsai will probably realise there's not that much new in this film that he hasn't presented elsewhere, but they'll be intrigued to see him go completely off the handle as he does - especially compared to his latest, sombre entry into the world of slow cinema, Stray Dogs.

This has been given the label "comedy", but it is far more than that.

As usual with Ming Liang Tsai every frame is a work of art: colour, symmetry and originality of vision rule.