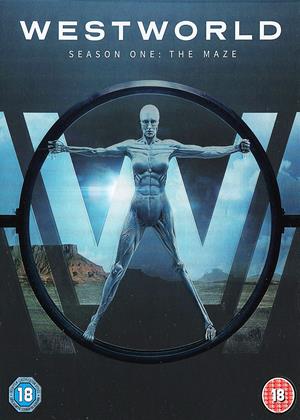 Are you taking notice? - Westworld: Series 1 review by VS

Westworld is derivative both in its use of perfect human look- alikes and in the creation of an artificial world that seems perfectly real. But, then, why shouldn't the series have borrowed from others? That has applied to works of art -- popular and otherwise -- over the centuries. I like its look which you could term "cool" but I'll settle for elegant and stylish. The real world it offers is utterly sombre and unnatural in appearance; not even a pot plant in sight in the offices or laboratories. On the other hand, the cowboy country of Westworld, a luxury holiday destination, looks magnificent with its terracotta colours, canyons and Mexican-style villages. The series is good to watch if you just want to blow your mind but it asks moral questions too, if you prefer to sit up and take notice.

I seriously enjoyed this series. The early 70s movie is great too - written and directed by the late Michael Crichton, all about a theme park gone wrong (he used the same plot for his Jurassic Park novel). Crichton was a scientist and always focused on future technology and what it might do. The early 70s movie is great - better than this for a succinct story and with Yul Brynner - and it was the first winner of the special effects Oscar, though the green-screen effects look dated now and the synthy music is dated too. Nothing dates so fast as a vision of the future.

This series is more of an epic - and maybe too drawn out (I am sure 10 episodes could have been made into 6 or 7). It takes the same Wild West setting of the original movie and takes it to the max.

You really do have to suspend your disbelief with this, which I usually did. Clever complex plotting too.

The actors are superb, and many Brits amongst them. Welsh actor Sir Anthony Hopkins phones it in and steals every scene he is in, of course. He must be almost 80 here.

But I loved it. Some plot holes here and there, and very violent, with just too much existential pondering which reminds me of LOST, the series I abandoned half-way through the first series, thank goodness!

The music is great, esp the self-playing piano (watch the short doc on the final DVD about that). Great the way they took modern songs, by Radiohead (Fake Plastic Trees, No Surprises and another); Black Hole Sun by Sound Garden; Back to Black by Amy Winehouse; The Cure's A Forest - all played on a Wild West pub piano with that slightly out of tune feel. So clever - real attention to detail.

I now want to rewatch the early 70s movie and rent series 2 of this. US drama series like this are just SO much better than the dross drama on UK TV, esp the BBC - which are all aimed at getting older female viewers, so are soaps really. This is REAL drama. Enjoy.

4 stars. If not overlong and drawn out, then 5.