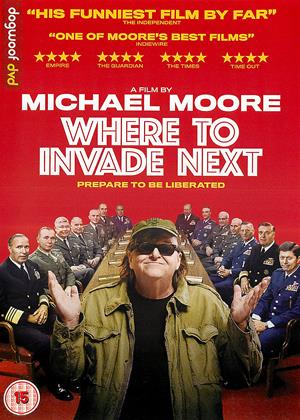 Synopsis:
Academy Award-winning director Michael Moore is back with 'Where to Invade Next', a provocative and hilarious comedy in which Moore will stop at nothing to figure out how to actually make America great again. Just in time for election season, America's favourite political provocateur. Michael Moore, is back with his new film, 'Where to Invade Next'. Honoured by festivals and critics groups alike, 'Where to Invade Next' is an expansive, hilarious, and subversive comedy in which the Academy Award-winning director confronts the most pressing issues facing America today and finds solutions in the most unlikely places.
The creator of 'Fahrenheit 9/11' and 'Bowling for Columbine' has returned with an epic movie that's unlike anything he has done before - an eye-opening call to arms to capture the American Dream and restore it in, of all places, America.
Actors:
Krista Kiuru, Michael Moore, Tim Walker
Directors:
Michael Moore
Producers:
Carl Deal, Tia Lessin, Michael Moore
Studio:
Dogwoof
Genres:
Documentary, Special Interest

Reviews (3) of Where to Invade Next

Another Michael Moore Classic - Where to Invade Next review by MD

Michael Moore may not be to everyone's taste, but I have always thought his films well worth watching, and this one is no different. He is getting on a bit now, and at times he can be very irritating, yet there is so much good stuff in this film that you can easily put aside any minor gripes.

Essentially the film looks at all the best things about society in Europe, and compares them to all the worst things about society in America, so clearly there is a strong bias in the presentation, but so much of what he reveals about both Europe and the USA is truly eye-opening and enlightening. Britain gets not a single mention, which is good because it allows you to cast a critical eye on our own society; perhaps unsurprisingly, I felt we came out 50/50, not as good as the best Europe has to offer, but certainly nowhere near as bad as the USA either.

The editing is brilliant, juxtaposing startlingly contrasting images to make his point, and the languid humour is still there in abundance, if a bit more forced than previously. It can feel a touch laboured towards the end, yet in many ways this is also the most important part as here he does a good job of showing the growing influence and importance of women in shaping the world, how Europe is leading the way in turning back thousands of years of male domination to create fairer, more humane societies.

Just like "Bowling for Columbine", I think this is an important film at a critical time, and I would definitely recommend it if you have any interest at all in knowing more about the world we live in. If nothing else, you'll be absolutely amazed by the Finns speaking English!

Amusing and educational. A look at how the US is falling short in so many ways. Let's hope they take note.

|I will never bother with MM again. - Where to Invade Next review by KR

This film is pure self indulgence on the part of Michael Moore. The message is clear: America has much to learn from Europe, Probably true. But there is no intellectual or critical depth and so lacks any real impact. And it is far too long .

Where to Invade Next review by Adrijan Arsovski - Cinema Paradiso

In a full-fledged feature where Michael Moore is the judge, jury and executioner – there’s no room for questioning his research methods or final conclusions of the subject thereof. In that regard, Where to Invade Next is poignant, albeit watered-down representation of everything the average American knows that is true, but is too busy with life to accept it as such.

Michael Moore’s work is often criticized for being overly one-sided, lacking facts and serious, in-depth research and portraying complex subject matters such as geopolitics, international relations and state policies in a cartoonish matter. This is true most of the time, since Moore’s wit often lies underneath the whole satiric approach and people tend to disregard his features as mere time-wasters in a world full of real problems.

In Where to Invade Next, Michael Moore tries to compare different state systems as opposed to the American one, and indeed that is what he does. He takes his filming crew to Germany, Iceland, Tunisia, Slovenia, France, Finland and Portugal, not necessarily in that order, and conducts interviews with workers, government spokespersons and the ordinary European Joe: what Moore hears in return is astonishing for him.

But, not as astonishing and ground-breaking as he makes it ought to be: sure, workers in Italy get maternity leaves, more days of paid vacations and even paid honeymoons against their American counterparts. Turning to the CEO, and the controversial director gets a rather obvious statement: the happier the workers are – the more productive they become. Has Moore uncovered a deeply-rooted conspiracy, or the Emperor has no clothes?

Then Moore proceeds to “plant” his American flag, both figuratively and literally, to every country he visits with his crew. In France, we are ‘misguided’ by the director and think that he is taking us to a five-star restaurant, when instead, much to our bewilderment – he crashes a school cafeteria which serves five-course edibles and is generally a nice place for one to dine in.

Furthermore, Where to Invade Next “invades” Finland as we learn the education system there doesn’t pile up children with homework, but leaves them to their own merits without usurping their free time. Finland is also not a fan of private schools, and instead focuses to better the education on its national level.

Apparently, Finland was torn between its education policies, but decided to bring rigid reforms and transform the learning system into what’s now known the No.1 education system in the world.

Moore’s mannerisms are fun to watch for limited amounts of time. After that, his shtick becomes weary and repetitive, and viewers cannot help but roll their eyes in disdain.

Love him or hate him – Moore’s certainly here to stay in the long run.