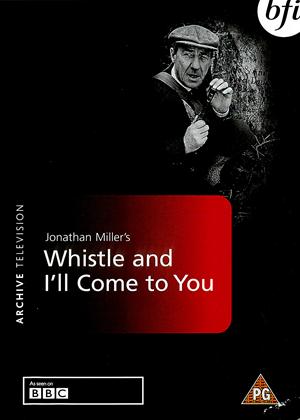 Synopsis:
M. R. James is one of the greatest writers of stories of the supernatural, and 'Oh, Whistle, and I'll Come to You, My Lad' is one of his darkest works - a tale of solitude and terror, and the dangers of intellectual pride. Made in 1968 for BBC Television's Omnibus programme, Jonathan Miller's adaptation succeeds in capturing the chill of terror at the heart of the story. The bleak Norfolk landscape is superbly photographed by Dick Bush to instil a sense of isolation and unease from the outset, and Michael Hordern's performance as the eccentric, grouchy professor is nothing short of brilliant. The final scenes will leave you with a shiver of horror you will not easily shake off...
Actors:
Michael Hordern, Ambrose Coghill, George Woodbridge, Nora Gordon, Freda Dowie
Directors:
Jonathan Miller
Producers:
Jonathan Miller
Writers:
Mr. James, Jonathan Miller
Studio:
BFI Video
Genres:
British TV, TV Documentaries

Rent other films like Whistle and I'll Come to You

Reviews (1) of Whistle and I'll Come to You

Spoilers follow ... - Whistle and I'll Come to You review by NP

As part of the BBC’s ‘Omnibus’ strand, this ‘television movie’ had an introductive voice-over from the man who adapted the story, Jonathan Miller.

Beginning with two unsmiling maids making up a pair of beds in a hotel somewhere on the East Coast, all filmed in crisp black and white. Then we are introduced to the terrific Michael Hordern playing Professor Parkin, a scholarly isolationist making his way toward the building. He is confronted with the mighty Proprietor (the excellent George Woodbridge, veteran of many early Hammer horrors). Stilted and awkward their opening pleasantries are, the Proprietor’s words become mangled and incomprehensible when pointing out the amenities. Oddness is immediately confirmed from these two, lending the proceedings a disjointed quality all of their own often exemplified by Parkin’s separation from the other guests, who are all otherwise gracious enough. Parkin’s world acknowledges them, but is content to remain apart.

During his ‘trudge’ across the windswept beaches, Parkin happens across a whistle made of bone obscured by sand. He is intrigued, keeps it, and begins to feel the presence of ‘another.’

Hordern is excellent throughout, his private irritation at the stubborn haddock on his fork, or the sand that clings to the whistle as he tries to examine it, convey a man completely relaxed and comfortable with his complete lack of social interaction. His brief conversations are interesting because he could quite easily be eulogising with himself rather than with whomever he is sharing a scene. His terror is equally private, which allows us the possibility that it exists in his mind alone. And yet, when we are allowed glimpses of it, it is fittingly obscure and well-realised and quite unnerving.

Parkin’s strangled, guttural half-cries at the climactic moments are successfully reminiscent of the noises we sometimes make when emerging from a nightmare. His terror is palpable and disturbing.