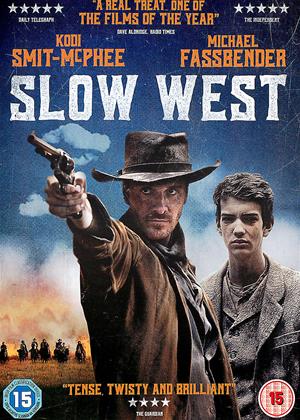 In some quarters this film has been praised to the skies, but it doesn't seem to be making any massive waves. That's because it's the kind of movie a certain breed of film critics of the more refined sort automatically love, but most people see as pretentious. That's not to say it's without good qualities. It often looks beautiful, it's trying really hard, and sometimes it works.

Then again, sometimes it doesn't. Director John Maclean provides a peculiar introduction which I honestly think he may have recorded when he was stoned, given his borderline incoherence, and the fact that he seems to think he had to go to New Zealand to find a gap between rocks exactly big enough to be blocked by a buffalo skeleton (a visual detail which has precisely nothing to do with the plot). But his belief that avoiding obvious western clichés makes his film totally ground-breaking is just plain wrong, especially as he doesn't really do so. Hard-boiled world-weary tough guy teaming up with naïve innocent and thus regaining touch with his humanity? Gee, that's never been done before! See in particular "True Grit", specifically the recent Coen brothers remake, to which this movie is so indebted that it directly homages that scene where a completely irrelevant anonymous dead guy is discovered so that a joke can be made about it. In the case of the Coens, it's a very clever reference to an earlier scene homaging another film that most viewers won't get, plus a really good one-liner so that everybody laughs whether they got the more subtle underlying gag or not. In the case of John Maclean, it's a jarringly anachronistic reference to the Darwin Awards.

Much of the movie suffers from the same problem. I'm pretty sure that upper-class Scotsmen in 1870 never said "You're always dissing me!"; and when the cynical badass character meekly leaves his gun on the counter of a shop just because an unarmed storekeeper tells him it's a condition of browsing, events unfold precisely as if he was the helpless puppet of a wildly implausible script. According to the director it's supposed to be "dreamlike", but that kind of vibe doesn't work unless you know how to achieve internal consistency. Alternating between fairly direct Tarentinoesque quotes from every movie, western or otherwise, that you think is cool, and drifting off into stylized overacting and a ludicrously symbolic plot that wears its politically correct heart on its sleeve is not the way to do it.

John Maclean obviously knows how to make his films look pretty, but has trouble choosing good scripts. The much more industry-savvy Michael Fassbender clearly knows it, and is on autopilot here, picking up his cheque for a lazily generic performance and moving swiftly on. By the way, at no point in the film do the protagonists travel significantly more slowly than they would in any other western whose characters are required to go a long way on horseback, so the Daffy Duck title makes no sense whatsoever, unless you're a director so stoned that you think it does.

Slow West for a Slow Brain - Slow West review by BE

What a very silly film. One star for the scenery. Apart from that, very missable with a storyline beyond belief.

Worth a watch - Slow West review by vs

Loved this film with its many references to other classic westerns and to Shakespeare's Romeo and Juliet. Filming is beautiful and it is one of those rare films which I just didn't want to end. However, the dialogue and references were sometimes anachronistic and this jarred but it didn't detract from my enjoyment of the film. I found the ending unbelievable but I think this was deliberate and the director emphasising that it is a story afterall.

Slow West is a very divergent 21st century western in that it doesn’t rely on being as action-centric as 3:10 to Yuma, overly talky as The Hateful Eight or even as kamikaze as The Ridiculous 6. Implied by the name, it’s a picture that takes its time to mosey across the old west and take in all its natural beauty and grit. At a time when westerns seem to be overly simplified, Slow West dares to be more in the way that a modern western should be made.

It’s a story not too simple and not too complex. The young Scottish boy Jay (Kodi Smit-McPhee) travels across the frontiers of the old west to find a true love he left behind. On his journey, he crosses paths with Silas (Michael Fassbender), a bounty hunter with the wit and smarts. Jay relies on Silas to survive the tough trail of Native American tribes and competing bounty hunters. But Silas has an agenda of his own on the path they share. Both are quietly brave and deliver some fantastic performances.

On their adventure, there are several scenes where the two will run across some unique individuals for a drink, a bite and/or a story. As Jay attempts to wander a dusty plain, he happens upon a man documenting the Native American tribes. They share some philosophy and a meal for the night, only for Jay to be swindled out of a horse in the morning. Jay and Silas later find themselves sharing a campsite with a collection of bounty hunters that share entertaining tales of mistaken bounties and fatal errors. There’s something rather classic and pleasing about a western that wants to take its time - moseying along towards its goal while taking a breather between the violence.

First-time director John Maclean has a knack for hitting the right tones of drama and comedy in a free-flowing western. There’s a perfect moment that encapsulates this spirit when Jay and Silas stumble upon the corpse of a man that was crushed by a tree. The body had been there for so long that it is picked clean to the bone. Jay says it’s not funny, but Silas convinces him that it’s a little bit funny. It creates an atmosphere of grit and violence, but also takes sobering moments to appreciate the strangeness of survival. Jay is able to survive an attack from Native Americans by catching an arrow in his hand rather than his face. Silas smiles at Jay’s luckiness and casually rips the arrow out of his hand.

Another surprising trait of Maclean is his impeccable eye for shooting a western. He makes great use of wide shots to showcase long and desolate plains that the duo wanders across. Even during the climactic shootout, there are moments of beauty where Maclean makes great use of space and distance as bounty hunters converge on a house. The close-ups of this scene don’t skimp on the blood either as the violence becomes quite raw at times. It felt strangely old-fashioned to watch an action scene that has faith in shots and composition as opposed to keeping the camera constantly moving.

Slow West feels both traditional and fresh as a western of beauty, thought and grit. At a brisk 84 minutes, it’s surprising how much time the movie takes to dwell on the more interesting angles of the old west. John Maclean creates characters and settings that breathe with life and sing with a subtle charm. It may not have the same bite and grittiness as the more hard-nosed modern westerns, but Slow West reminds the audience that intense shootouts and fast-paced horse chases are not required for the genre. Sometimes you just want to take in the majesty of the cosmos or the wonders of life before the guns blaze and the horses ride.