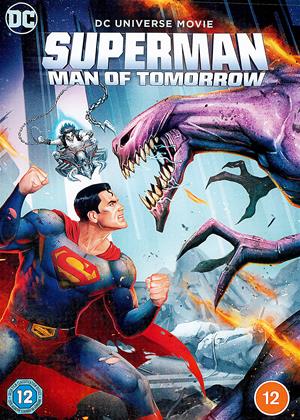 Synopsis:
Meet Clark Kent. Sent to Earth as an infant from the dying planet Krypton, he arrived with as many questions as the number of light-years he traveled. Now a young man, he makes his living in Metropolis as an intern at the Daily Planet - alongside reporter Lois Lane - while secretly wielding his alien powers of flight, super-strength and x-ray vision in the battle for good. Follow the fledgling hero as he engages in bloody battles with intergalactic bounty hunter Lobo and before fighting for his life with the alien Parasite. The world will learn about Superman…but first, Superman must save the world!
Directors:
Chris Palmer
Producers:
James Krieg, Kimberly S. Moreau
Voiced By:
Darren Criss, Zachary Quinto, Ike Amadi, Eugene Byrd, David Chen, Alexandra Daddario, Brett Dalton, Neil Flynn, Ryan Hurst, Cissy Jones, Piotr Michael, Cristina Milizia, April Stewart, Bellamy Young
Writers:
Tim Sheridan
Studio:
Warner
Genres:
Action & Adventure, Anime & Animation, Children & Family

Reviews of Superman: Man of Tomorrow

The idea of another Superman origin story doesn’t sound too appealing at first for Man of Tomorrow. By now everybody and their grandma knows the familiar story of the last son of Krypton coming to Earth to become the legendary superhero. So with the discovery of Clark Kent being Kal El not being as enticing a reveal anymore, this animated origin story takes a far different approach to the character, rewriting his ascension to the cape a bit more thematically driven than just out of circumstance.

The film makes its intentions pretty clear from the first scene that this is more a story of Superman seeking acceptance than fighting the big baddie. As a child, he watches a sci-fi film with a friend and feels horrible that his friend thought aliens were gross and scary. Clark doesn’t say anything, crying about it later. Even when Clark eventually learns the truth about his lineage, he still resorts to keeping his identity a secret, donning more of a simple mask and jacket when performing his heroic feats of rescue. He’ll eventually get the familiar outfit but hasn’t quite found that identity yet.

Another identity he has yet to find is that of the reporter at the Daily Planet. Clark does not zoom straight to the top but rather starts off slow as an intern and go-for of the office. There’s growth here. Sure, Clark is a speedy typist but he hasn’t quite figured out the psychological mechanics of landing a big story. Lois Lane, however, has figured out all the tricks, per her usual introductions in most Superman origins. Maybe if Clark can hang around her more often he can learn to be a better reporter. Maybe even fall in love someday.

The antagonist of the picture is Parasite, a being that can absorb the energy and powers of anybody he touches. He’s portrayed in the film more as a monster desperate for his survival and return to his wife and child. He figures he can change his look if he consumes more energy but doing so not only leads to a body count as he kills anyone he touches but also makes him more into a creature that Godzilla should fight. He’s a monster, sure, but also a human being who Superman tries to keep in mind when trying to stop a rampage about Metropolis.

Superman is not alone in this story as he finds similar peers to interact with. Lobo, the intergalactic bounty hunter with a crude personality, drops in on Earth to both battle the Man of Steel and let him in on news from the stars. He’ll only reluctantly agree to help, being the anti-hero that he is. Less offensive is that J’ohnn J’onze, the Martian Manhunter, another alien who is the last of his race. They connect in genuine conversations where they feel they have a lot in common and a lot to hide. They realize they can’t fully be themselves around humanity but can maybe be more open when in familiar company.

Also present in the picture is Lex Luthor, more or less playing the same elite criminal he has always been. He speaks of industry, spends time in prison, and eventually goes against Superman for deeming an alien to have too much power. He’s perhaps the least interesting character in this movie as his motivations remain as clear as they ever, proving to be the reliable though tedious antagonist. While he does serve fine purposes in most Superman stories, here he just feels like a tacked-on element of discrimination for Superman to best, in addition quelling Parasite.

Superman: Man of Tomorrow tinkers just enough with the formula to feel more refreshing than routine. The action is not too shabby and the animation with thick outlines has a stronger visual appeal than the usual cleaner designs of other DC animated movies. The themes present are strong even if they don’t feel as vocal the more the film goes along with the mounting action. The creature-feature angle with Parasite goes gutsier in terms of staging a horror film, complete with a horrific reveal on the operating table. In terms of a revision of the classic story, the changes made here are far more exciting than the cosmetic changes of Superman not having any underwear. If the briefs ain’t broken, don’t fix them.