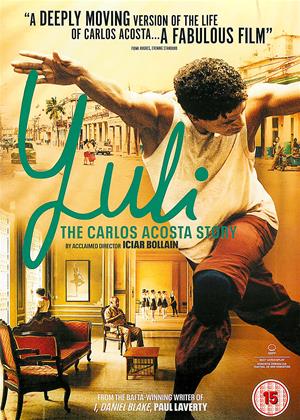 Rent other films like Yuli: The Carlos Acosta Story

Carlos Acosta is a man with a story that makes for great biopics. Nicknamed Yuli, he was the son of Pedro, a man who looks highly enough on his son, believing him to be the descendent of an African warrior and god. Pedro is wise enough to know that Carlos is destined for far more than poor streets of Havana have to offer him and makes it his goal to embrace and support Carlos talent for dance, sending him to the prideful National Ballet School of Cuba. It won’t be an easy road for Carlos but one that is worth pursuing the marvel of a dancer he’d become.

What’s most remarkable about this story is that the real Carlos Acosta more or less plays himself in this story of his own life. This is as an adult, of course, where the younger version of himself is shown to be a troublesome kid who would rather escape the world of ballet than step into it. But as the film progresses, we see that interest takes flight and bring about some monumental. Carlos would rise from the ranks to be credited as one of the first black ballet dancers in major theater productions, such as the Houston Ballet and the Royal Ballet in London. Roles that were typically relegated to white ballet dancers now had Carlos cavorting about the stage, marking a cultural shifting in representation and an inspiring example of making dreams come true, even if you don’t see yourself in them at the moment.

The film doesn’t shy awake from the darker parts of this journey. Pedro is portrayed as angry and abusive while his mother is sick and his sister is mentally ill. There’s a lot of weight on young Carlos’s shoulders that it’s easy enough to see why he starts out as someone ill-tempered and bitter enough to reject the school he was sent towards. It also didn’t help that he lived under a Communist rule of authoritarian intent that adds an extra dose of oppressiveness to make that dance to the stage all the tougher. Unfortunately, because the film leans into its more inspirational intent, much of the somberness is given a mushy glaze. Carlos’s early life is treated with a certain melodrama that has hills and valleys of interest but those hills rarely rise high enough to make for great drama.

Where the film excels best is when the adult Carlos is dancing, performing astonishing feats that are all the more impressive that some of this really happened. They are fantastic moments of wonder and make one want to root for Carlos all the more. Moreover, it made me want to root for the film to be a little bit more than just this showcase. Or perhaps maybe it could be the only showcase. The editing leaves quite a bit to be desired considering how much of this story could be tightened up to lighten the lesser aspects of the drama that don’t punch as hard as they should.

Even with some stumbles here and there, the film is ultimately a pleasing picture for the story it sets out to tell. It’s just that when the film merges its staged aspects of Carlos’s childhood in with his true-life dance performances the movie loses its own edge. Because if Carlos’s ballet productions were stellar enough to be included in this film and it’s the highlight of the picture more than anything else, it begs the question: Why wouldn’t I just watch his plays instead of getting mere glimpses of them in a run-of-the-mill docudrama?