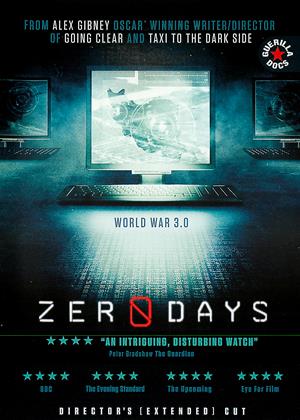 Sign up
Mea Maxima Culpa: Silence in the House of God

A gripping thriller - and it is fact! - Zero Days review by LR

Alex Gibney has made some excellent documentaries (eg Silence in the House of the Lord) but this one is outstanding. It tells the story of a cyber attack by the USA and Israel against Iran, using the Stuxnet computer virus. The attack sabotaged centrifuges in the Iranian nuclear industry, causing them to run amok. The attack worked. But then the retaliation began and it is still ongoing. This is a powerful story of great political importance - all the more so because the effects are still being felt today. Cyber warfare can be as destructive as a bombing raid and countries all over the world are arming themselves with cyber attackers. See the film and see the threat looming before us.

Another compelling Alex Gibney Doc. Einstein said he didn't know what weapons the Third World War would be fought with, but he said he knew the Fourth World War would be fought with sticks and stones. Now we know what weapons will be used to fight the next big wars: computers and internet connections. A must see expose on the kind of covert cyber-operations that will inform and infect all political conflict in the future.

A feature for both laymen and information security experts (hackers) to ‘enjoy’ and find some new insights within, Zero Days is a compelling real-life documentary thriller which no fictitious adaptation can come even close to the thrills it offers: from its sole disturbing beginning – to its very engrossing end. I’ve deliberately put ‘enjoy’ in hyphens, for no sane person would care to find pleasure in such cyber-atrocities as carried out by whatever government. Welcome to Cold War numero zwei.

Zero Days puts large weight on witnesses (infamously: whistleblowers) who’re not afraid to pull the plug from within as soon as things go south. And while almost everyone nowadays knows that ‘something is rotten in the state of Denmark’, no one could’ve imagined for citizens’ privacy to be endangered in such ways as to, simply put it: no ordinary citizen is safe anymore.

Further down the road, continuing the work of Snowden, Assange, Chelsea Manning and people of similar caliber, Alex Gibney documentary provides valuable insights into the work practices of world most infamous agency, namely the NSA. They describe themselves as geeks with Star Wars collection sets hanging above their cubicles, comics and whatnot, and to think such people would join such cause is extremely mind boggling, if not downright ridiculous. What’s more: these ‘geeks’ may be responsible for the biggest cyber-warfare actions conducted in the 21-st century, so far.

Now, the plot: Zero Day nears on the so called Stuxnet scandal, which I will not fully disclose here in order to not spoil the experience as you go along. Please, steer clear off of any naysayers and parrots who try to recount the events depicted by employing their vocabulary. Instead, opt to watch Zero Days without preconceptions and biases, for it will be totally worth your time.

The editing is amazing, while the pacing is perfect: Zero Days plays like an engrossing thriller novelette that unravels key information one after another and each anteceding one adds more weight on the shoulders of unsuspecting viewers. It’s so masterfully crafted that you almost lose yourself in the midst of everything that’s throwing at you, in a positive manner that is. Future producers, editors and filmmakers: this is how you should structure your movie, period.

For the events themselves, you have to see them to believe them. At first, I genuinely thought the filmmakers were messing with my layman knowledge of cyber-security, hardware and technology overall, and boy did I wish this was the case. Unfortunately, everything depicted in Zero Days is as real as the next president of the United States (as of 2017).

People of all ages and backgrounds, you do not want to miss on this one.