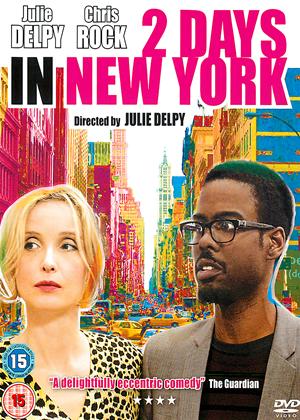 Synopsis:
Meeting the other half's family can be nerve-racking for anyone. But for DJ and journalist Mingus (Chris Rock), the first encounter with the family of his French artist girlfriend Marion (Julie Delpy) may be even more of an ordeal than he had originally imagined. The arrival of Marion's sausage-smuggling father (Delpy's real-life father Albert), oversexed sister (Alexia Landeau) and oddball ex-boyfriend (Alex Nahon) shatters the relative peace of the New York apartment where Marion and Mingus live with their two young children from previous relationships.
During the two-day visit Mingus finds himself lost in translation, and his relationship with Marion (who is preoccupied selling her soul as a publicity stunt) is put to the test. As for Marion, she will soon have to decide what is most important to her - her boyfriend, her family or her soul.
Actors:
Julie Delpy, Chris Rock, Albert Delpy, Alexia Landeau, Alexandre Nahon, Kate Burton, Dylan Baker, Daniel Brühl, Talen Ruth Riley, Owen Shipman, Malinda Williams, Carmen López, Emily Wagner, Arthur French, Petronia Paley, Alex Manette, Marcus Ho, Gregory Korostishevsky, Mai Loan Tran, Pun Bandhu
Directors:
Julie Delpy
Producers:
Scott Franklin, Ulf Israel, Christophe Mazodier, Jean-Jacques Neira, Hubert Toint
Voiced By:
Erin Darke
Writers:
Julie Delpy, Alexia Landeau
Studio:
Network UK
Genres:
Comedy, Romance

Reviews of 2 Days in New York

In 2007, writer-director Julie Delpy gave us ‘2 Days In Paris’; this time, she’s back with her Woody Allen-esque film making tendencies with ’2 Days In New York’ about Marion (Delpy) and her relationship with now boyfriend Mingus (Chris Rock). These days, Marion is co-habiting with another American but of a different race and is raising their children (one each) from previous relationships. Like her first project, Julie Delpy puts her family into the mix with her real-life father Albert playing her dad Jeannot, co-writer Alexia Landeau as sister Rose and Alex Nahon as Rose’s creepy boyfriend Manu. They’re not exactly behaved and chic French people as expected, and that’s where the farce comes in.

With all of Marion’s artsy eccentricities, the added bonus of the setting of New York, filmed with a very wear-and-tear view, makes her stresses amplified. Think: You have a photography exhibit in the works, your French family is a hot mess (starting with being detained at immigration for bringing beloved cheese and sausages in their luggage and on their persons), and your American journalist husband feels not really out of place but out of sync.

Julie Delpy and Chris Rock do look like an unlikely couple and yet, they try to work it out. Rock is a good actor with distinct voice plus his animated face, you can see all the emotions on his being. As Mingus, he’s stressed as well. Instead of helping out his partner Marion cope with it though, he stays in his room and talks to a President Barack Obama’s cutout. It is in this particular scene that Rock actually shines.

The shenanigans Marion’s family experiences are not that different to the foibles that our own family does. ‘2 Days In New York’ is actually a relatable piece – who doesn’t have a crazy family? The dysfunction is what makes us all the same. Funny in an upper crust but unafraid to be crass when need be, Delpy has gotten herself a niche when it comes to the type of movies she wants to make.