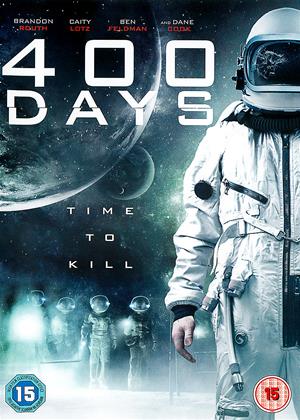 Cannot recall the clever film which ended with the fictitious astronaut escaping the false dome in the desert...a take on the idea they never went to the moon at all.

Starts off with 4 totally unlikely professional scientific pilot types. One goes straight from a bender to the mission. A mission that is also totally unlikely. Ends up with a form of zombie/cannibal thing. Not sure if was supposed to be a serious film or not. Someone lost money along the line for sure

I'm giving this film two stars for the opening credits; they suggest something fairly good.

So, does anyone have any idea as to what is going on in this film? If so, tell me! Was it zombie apocalypse? Nuclear winter? Global warming? Donald Trump?

I did watch to the (bitter) end in the hope that there would some kind of understandable climax. Oh how wrong I was. Yet another segment of time I will never regain.

There are plenty of words that describe this... - 400 Days review by ME

There is nothing competent about this movie. Just avoid unless you are curious as to how bad something can be, like I was. I can confirm that this is not one of those movies that a niche audience love, unless you like genuinely terrible movies.

utter rubbish fron start to finish.I sat dumbfounded at how poor it was,its sheer stupidity stunned me like a punch to face which made me unable to move to switch it off.like watching a slow motion replay of someone dropping soiled tissue paper into a toilet.If i had been in that situation I would of stangled Cook`s character in the first hour,a man with no appeal,no talent,no wit and who takes being annoying to new levels.Avoid at all costs