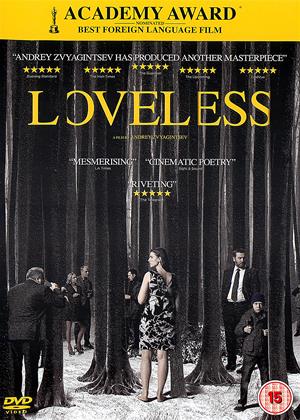 Meet the new Russia, same as the old Russia - Loveless review by jb

Zhenya and Boris hate each other. Married for 12 years, they both now have new partners, and are bitterly divorcing. Caught in the middle is their young son. Lonely and unhappy, the boy seems to be little more than an inconvenience for both parents.

One day the boy disappears. The police, understaffed and overworked (is the opposite ever the case?) abnegate responsibility to a highly organized volunteer search force. All parties now have to work together. In a different film the parents might find some sort of accord, but director Zvyagintsev is not one for easy comforts; Zhenya and Boris's mutual loathing only deepens.

Beginning with shots of a frozen, tree-bordered river, Loveless takes a cold, hard look at contemporary Russia and its new middle class. Beauty salon manager Zhenya is addicted to her mobile. Boris works in sales, his office modern and open plan. They have things; Brazilian waxes, decent cars - 'freedom' - but there seems to be something deeply poisonous about Russia that nothing can detoxify. Yes, both parents have found love again but neither seem able to escape the crushing effect their country still exerts; towards the end we see Zhenya, clad in a Russian national tracksuit, running on a treadmill, going nowhere. Boris has to keep up the appearance of being happily married in order to please his religious boss. Russia doesn't change, the film suggests; it can ruin you at any time.

Loveless does perhaps brush a little too closely up against the cliches of 21st century society with its jibes at narcissism and spiritual emptiness. And yes, there are many, perhaps too many films about the disappearance of children. But Zvyagintsev's ability to make familiar themes his own puts him at the top of world cinema.

Though visually captivating, this is not an easy film to engage with. The anger and the cynicism of the adult world are the dominant motifs, and the absence of care and love towards the child who disappears is truly chilling. The parents learn no lessons and the future for Russia is depicted in very bleak terms.

Zvyagintsev is clearly making some telling points about the state of his nation, but the concerns and the moral decay have universal implications. This is harsh truth-telling at its most riveting.

Very "Russian" but also very resonant to our own situation. - Loveless review by RC

Another slice of modern Russian middle-class life from Zvyagintsev (Elena, Banishment, Leviathan) reminding us how similar our societies now are.

The lovelessness of the title is the characters' lives; their empty mediated life produces tragic consequences in their reality.

Slow paced, sometimes satirical, a portrait of the alienation produced by the modern world. Zvyagintsev works in the tradition of great Russian film making, now totally accessible and comprehensible to an English audience.

There is great cinematographical beauty in this film from the marvellous opening landscape of snow laden trees and dark lake, to the city at dusk seen from the woods during the search scene and the long straight roads at night fall, all charged with meaning and forming a visual structure in this wonderful drama.

Everyone is a total selfish arsehole. The only redeeming factor is the boy who disappears. Andrey Zvyagintsev at his bleakest but a great study of characters and quite amazing acting and directing.

Some time ago, after watching Zyvagintsev's "Leviathon", I wrote a review likening elements of that film to the poetry of film-director Andrei Tarkovsky.In Zvyagintsev's latest film "Loveless", the poetry of snowy landscapes, versified by slow, panning camera shots, the juxtaposition of an agelessness embodied by the camera lingering long over the bark of great trees, with the ephemerality of human lives evinced by the final shots high amongst the branches of the same trees of the last human contact the "unloved son" had with our "material" world, all conspire to create that same poetry that pervades Tarkovsky's films. And of course, the allegories within the film's construction, embodying indictment of today's Russian political system, are patent; the emotional bankruptcy that imbues the unbowdlerised desolation of a "destructed marriage", the emptiness of a building, once, presumably, the host of human warmth, now cold, empty and crumbling the allusions to Russian Orthodoxy and Sharia Law, the TV reports of Russia's "paternalistic" view of Ukraine and the former's annexation of Crimea.........And, the gossamer holding together these fragments of dissention is a Bergmann-esque portrait of scenes of mutual evisceration of each other by the 2 "adults" and much, much more heart-breaking, the witnessing of this horror by their unloved 12 year-old son. A masterpiece of a film.

The Russian middle class context adds an interesting extra dimension to this sad story of a boy suffering and running away as a result of a marriage break up.  There is a contrast between the relatively supportive institutions and the selfishness of the two main characters.  The tragedy is that one can see the problem start to repeat itself in their subsequent relationships.  The director manages somehow to elicit sympathy for the husband and wife, which is quite an achievement given how the film progresses. Strongly recommended.