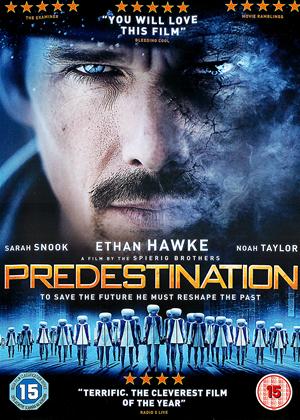 Just occasionally, a film comes along that really does seem like nothing you've seen before. This is just such a film.

It's about time travel, it's about boy meets girl, it's about a hitman and a terrorist, all of which are not exactly new in the movies, but the story itself, and the way it unfolds, are completely original and not at all what you might expect.

I suspect some folks may find it too complicated or too pretentious to really enjoy it, but I thought it was a really neat idea with excellent performances (in particular by Sarah Snook), a no-nonsense, provocative script and sharp direction. When you get to the end, you just have to watch it again to see all the clues throughout, and to appreciate that it truly is a very clever and engaging little movie.

Definitely recommended if you have an open mind and want something way out of the usual mainstream fare.

This being a movie about time travel, perhaps it's apt I give my thoughts in reverse chronological order.

As the closing credits roll:

What!? How could they leave that detail unresolved? I mean... but... ok, sure, most of it, almost all of it, makes sense now, except I have no idea what might happen next.

For most of the middle:

It's a bit complicated, but I think I see where this is going. Are the writers really going to go there though? It'd be kind of an avant-garde plot twist and I'm not sure how they'd tie up the loose ends afterwards.

This is odd, in a good way. The characters seem compelling and there's obviously going to be an enjoyably intellectual plot with cause & effect in the wrong order and different people turning out to actually be the same person from a different point in their history. I wonder what will happen next?

Why is he carrying that other briefcase as well as the violin?

I tell you from the future, you have enjoyed watching this movie. It's a clever and interesting bit of writing, with some fine performances, and definitely worth a watch. But you're now wishing it was half an hour longer. Don't say I didn't always have said I was going to warn you.

The movie is well-acted, well filmed and has a style of its own which doesn't feel borrowed from anything else.

Like me, you might deduce the plot and supposed twists/surprises very early on (perhaps I've just seen a lot of time travel movies and know what I'm looking for) - but the overall journey is still a good one.

There are no scenes where the movie becomes dull, but also none really of particular tension or threat. Instead, you have a solid story, well told, and it isn't overly long.

The only disappointment? The climax is delivered in the manner of "wow, you didn't expect THAT did you?"... but actually, I did, and I'd known it was coming for at least an hour. It would have been nice to be hit with a real surprise.

what came first the chicken or the egg? - Predestination review by TJ

This is a very cleverly written piece of scifi… its a difficult film yo review as it would be so easy to spoil the gradual reveal… suffice to say the phrase 'Want came first the chicken or the egg ' as utterred by the barman proves to be prophetic.

Just be warned its a slow burner… but well worth the wait. If

It's a bit like a Spanish time travel movie whose name I forget, or one of many Dr Who episodes.

It's a bit slow in starting and wordy (though the first scene gives massive clues re the rest of the plot). But it soon gets going and is highly watchable.

The gender issue is a weak point (men do look like men and women like women) but suspend your disbelief and you'll enjoy it.

Acting is fine - lots of Aussies doing American accents (it's an Australian movie set in the USA).

Clever, tricksy, a bit nuts and not overlong, with a pulsing soundtrack to drive things along.

I enjoyed it so 4 stars.

I found this to be interesting, but very complicated. Even after all the plot details are revealed, its still a head scratcher.

This would suit someone who likes to think about the films they watch in great depth.

Acting was uniformly very good but... The audience has to put in a lot of work to follow this film. But the central plot; which I (will not give away) was I think unique, It came as a surprise, when I found out what had actually been going on; and I have not seen the central idea any where else in any other film about time travel I have seen.

I would recommend it, but you have to be in the mood to give your brain a workout, its not an easy watch, but its a well made film. B.

Astonishingly complex, and even after reading the Wikipedia synopsis, I still cannot get my head around it all.

Watching it, all my brain was thinking was (a) The Temporal Prime Directive from Star Trek had nothing on this and (b) Dr. Who's statement of "timey wimey". Good luck in trying to understand it all (Without cheating via Wikipedia)

Time to give up on this - Predestination review by AB

I normally like time-travel movies, but this one is incomprehensible during and even at the end of the film. The first 30 minutes of the film is just a conversation in a bar between the two main characters. I actually had to check that I had been sent the right DVD. My wife was as equally baffled as I was. It's a shame because Ethan Hawke is a talented actor.