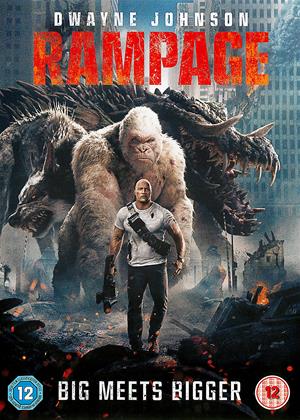 You get what you'd expect - Rampage review by AL

Check in brain at the front door and sit down to see a film about genetically altered animals rampaging around, being pursued by The Rock and Money Penny. You get what you'd expect, but because of Dwanye who carries the film, it rises above the sort of dross you get on SYFY channel. A steady 3 stars. Absolutely daft, but in a nice way.

Not sure whether the director wanted this film to be comical or not but every aspect of it is farcical to the point you have to laugh. As the above reviewer has mentioned 'check in brain' before watching...and see how humorous Dwayne 'the rock' Johnson talks with his mate gorilla 'George' only to be infected with a virus from a falling shuttle which mutates animals into huge rampaging beasts controlled by a company called Energyne and it's 2 evil bosses (you don't see anybody else). Watch how Dwayne and Naomi Harris an embittered ex employee survive plane crashes, other beasts, a collapsing tower etc. trying to save Chicago - you get the picture.

An entertaining film to pass an hour and a half if you can suspend all reality... 2.5/5

Too stupid a film - Rampage review by gazmb

I looked forward to this but good god what a waste of my time. Its dreadful in every way. I'm surprised The Rock even starred in this, he's better than this level of film. The script it's dreadful as well.

There have been some great big monster movies in recent years: Pacific Rim, Godzilla and Kong: Skull Island. Rampage doesn't come close to those films - some of the CGI effects are decidedly poor. It's utterly predictable in being little more than a macho posturing vehicle for Mr Johnson (who is still a very likeable actor), but its heart is in the right place and you could do a lot worse (e.g. Pacific Rim: Uprising) if you're after a new big monster fix.

PS My wife thought it was dire.

What a farce - Rampage review by RA

Disappointing is to put it mildly. Rock obviously needed the cash to appear in this load of rubbish. The gorilla played a good part but the story line was so flimsy even it could not make this film enjoyable. To be fair, my other half thought it was a good watch ???????. That's why I gave it two stars instead of one.

This movie was so much fun, real Saturday morning picture's stuff.

Highly recommend if you fancy a romp that you do not need to think about too hard.

A creature feature with The Rock facing off against giant animals sounds like fun, but it’s only in the final half-hour that the film begins to live up to its title. The first hour is full of irrelevant dialogue and techno-speak as the characters explain themselves to each other. There’s even another big boring cgi gorilla (enough already). As if the filmmakers realise something more is required, they insert a ho-hum plane crash in an attempt to liven things up, but that’s hardly what we want form a Rampage movie.

Things pick up in the third act when the gorilla, together with a giant wolf and alligator, lay waste to Chicago. With some good aerial shots of the destruction, this is more like it. Shame it took so long to get there.

This is the best bad film I have seen in years. It does not claim to be more than it is, it is completely upfront about the blatant plagiarism throughout and it is competently, in places excellently, made. Sometimes, checking your brain at the door of the cinema is just what a person needs to do.

Rampage is very much aware of the film it is trying to be. It’s based on a video game where the player would assume the role of a giant monster that busted up buildings and ate people. From such source material, it fits neatly into the category of giant monster movies akin to Godzilla and King Kong, where the military is always useless, the monsters always destructive, and the carnage always silly. Director Brad Peyton is an accomplished enough director to know you don’t take a film with a giant albino gorilla battling a giant flying wolf too seriously. But in his attempt to be that tongue-in-cheek action romp, I wished he’d amp up the dumb to be the destructively entertaining farce it could have been.

In order to get to the game’s plotting of giant monsters ripping up a city, the script takes the route of a 1950s giant monster movie. Three boxes containing a gas for creating weaponized animals, developed by a sinister science organization, crash to Earth from a destroyed satellite. Three predatory animals are exposed to this gas and grow in size and aggression. Ralph is a wolf that can now topple over trees and somehow has the ability to fly. Lizzie is a crocodile that ascends to a girth that can cause tidal waves and brandishes spikes that pierce anything. And then there is George, the albino gorilla that really only adopts the ability to get bigger and louder. By sheer expression and intelligence, you can probably guess which animals we’re meant to root for in this fight.

George resides at a wildlife enclosure and is cared for primatologist Davis, played by the always muscular and charismatic Dwayne Johnson. It makes sense; only someone as buff and likable as Dwayne Johnson could not only connect well with a gorilla, but also joke around with him and play jokes on his newbie care staff. So when George starts going nutty, its Davis to the rescue to find a cure. Sure, he’ll get in on the action, but there’s only so much running, jumping, and gunning Johnson can do in a giant monster movie, short of becoming a giant monster himself. Damn, that’d be a hell of a wrestling match.

Somewhat knowing of the formula, Peyton tries to play up his human characters to be as cartoonish and over-the-top as the creatures. Sadly, they all seem just a hair short of being appealing figures. Dwayne Johnson casually strolls through this film, putting on a show of muscles, moves, and smirks as he always does. Malin Åkerman plays the evil president of the gas-developing conglomerate, strutting around in sexy suits and seems to be one fiendish idea short of a maniacal laugh. Jake Lacy is Åkerman’s cowering cohort that is terrified of going to prison for his wrongdoing and seems to have some form of fast food in his hands in every scene in the office. Jeffrey Dean Morgan slaps on a suit to play a government agent, but he’s mostly reprising his Negan character from The Walking Down, smirking and swaggering with talk of badassery.

But just when it seems the film finds its groove of placing tongues firmly in cheeks, the script reverts back to those old monster movie tropes I wished remained dead. Namely, there’s a truckload of exposition present to try to make sense of this all. Naomie Harris plays the obligatory scientist that must show up to state the explanations for this giant monster madness. The gas ingested by the animals contains the finest genes of animals that allows for regeneration, mutations, flight, blah blah blah. So overblown is this aspect it nearly wrecks the carnage-driven third act where the giant monsters get to do their thing. And while it is fun watching an ape, wolf, and crocodile play the game of who can destroy Chicago first, I couldn’t help but feel there should be more with a handful of shots that are too far from a distance. When a giant ape is flipping tanks and eating people, I don’t want to watch it from the safe-distance news copter; I want to be right there in the action looking up at this frightening beast. The few medium close-up shots showcase how much more effective and entertaining this aspect can be.

Rampage certainly fits the bill for any kid that wants to watch more giant monster action akin to the likes of Jurassic World, Godzilla, and King Kong. But unlike those recent entries in the genre, there’s rarely a moment that sticks out the way Godzilla shot atomic breath into a monster’s mouth or King Kong ate an octopus. With so much potential left untapped, this is a movie that certainly gets the job done, even if it’s not that memorable. School kids may find the schoolyard relaying of highlights a tad difficult when the shocker moments of eating people and decapitation don’t pack as hefty a punch.