Rent The Nutcracker and the Four Realms (2018) 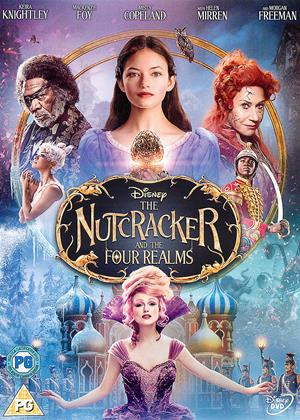 Rent other films like The Nutcracker and the Four Realms

Reviews (2) of The Nutcracker and the Four Realms

Lots of expensive actors in this one. Disney likes to play safe. Well made modern version of an older theme. Kids will enjoy it i think. Poor old Keira having to hold that squeaky voice all the way through!

The Costumes and Production design are luscious but the script, most of the lead acting and most of the support performances are either outright awful or lackluster.

Jayden Fowora-Knight As the Nutcracker was superb, Helen Mirren (Mother Ginger) was excellent, but didn't have much to do, and every one else with any talent was wasted.

Too slow and boring to engage smaller children, too lifeless and and flat to engage adults.

Best watched with the sound off so you can wonder at the production and costumes, but make up your own story to go with the images.

I’m willing to bet that even those who never really dug the ballet will be begging through a performance after sitting through The Nutcracker and the Four Realms. The film even offers up a comparison. Halfway through the film, to find the most graceful way of delivering exposition, a ballet performance is put on with a fantasy realm’s level of theatrics with pullies and candle lights. I dare anyone to say that scene wasn’t more exciting than any of the vanilla special effects on display in this by-the-numbers adventure.

Mackenzie Foy plays the nice, creative, and charming Clara. She’s skilled with mechanics, great with physics, and has enough smarts to build a Mouse Trap contraption before the Mouse Trap board game was a thing. But she’s a little down with the recent passing of her mother, making Christmas a little less magical. Not to worry; her godfather, played by Morgan Freeman looking like he escaped from a steampunk movie, has just the thing to perk her up. It would appear his Christmas gift to her is access to a mysterious egg her mother left behind. But he won’t make it easy. She’ll have to get the key from his Narnia-style room that leads to the magical realms her mother once frequented.

Clara’s quest for the key leads her into a world trying too hard for that Disney whimsy. She meets the two foppish representatives of the realms of flowers and snowflakes, as well as the super-squeaky voiced Sugarplum Fairy, played by Keira Knightley trying to outdo every movie pixie that came before her. I felt like I was getting a cavity just listening to her. Compare that with the more subtle performance of Helen Mirren as Mother Ginger, the aloof villain for an obvious twist. Her performance is, well, it’s just Mirren putting on her best face, despite her character requiring a crack on her cheek. I guess she turned the other one when it came to fantasy adventure that didn’t give her much to do besides crack a whip at tin monsters, which sounds more fun on paper.

The film tries too hard to make all the characters fit so neatly into place that there’s not much personality to it all. Consider Clara’s Nutcracker bodyguard played by Jayden Fowora-Knight. He’d make a great straight man if only he had someone interesting play off of. There’s no tension when the battle breaks out in a predictable and not-so-dangerous fight of large tin soldiers versus a robotic circus tent (again, more fun on paper). And Clara’s ultimate lesson about having confidence in herself comes off as the most standard of MacGuffin delivery devices that you’ve probably seen in at least a dozen other films.

The one and only shining beacon of entertainment in this dull farce is the Misty Copeland as a ballerina princess. She has no lines; only fantastic moves in her performance of the story of Clara’s mother. Even better, the end credits feature her performing to the familiar Nutcracker melodies once more with an added infusion of street dancing. As fun as this looks, it begs the question: why isn’t this unique ballet the whole movie? Why must we sit through a tired display of robots, magic, fairies, and set piece after set piece when there’s a perfectly dazzling ballet right inside this movie, struggling to break out?

The Nutcracker and the Four Realms is such a snoozer that is the very definition of the phoned-in fantasy. It has good intentions for sure but comes so standardly packaged that it’s bound to bore the adults while mildly amusing the children. Flip this on if you’re looking for something to crash with in front of the kids after a big Christmas dinner.