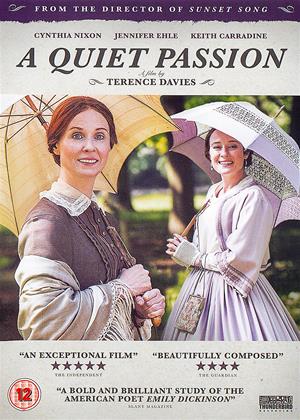 Reviews (8) of A Quiet Passion

We watched this with a group of friends on holiday recently. It split the audience down the middle. If you begin by being completely unaware of who Emily Dickinson is, you are likely to go and find a book to read but others, myself included enjoyed it. A quiet biopic depicting the inner turmoil is of Emily Dickinson and some of her relationships. Marvellous Terence Davies interior scenes and beautifully lit.

Not appealing - A Quiet Passion review by LC

There's not a lot to like about this film. The characters are generally unlikeable, and get more so as the film goes on. The dialogue is absurd, with witty repartee being mandatory to anything anyone says. There's a lot of misery, illness and death. the poetry is OK, but you'd probably be better off buying a book of poetry than sitting through this film.

An overlooked Oscar-worthy performance - A Quiet Passion review by TR

Why on earth was Cynthia Nixon not even nominated for an Oscar? Her performance is brilliantly understated, as is the whole film.

Moving and beautiful film. - A Quiet Passion review by BL

Enjoyed the rhythm of this film and it inspired me to know more about Emily Dickinson the poet of whom I was ignorant. The acting was superb and very moving. I might well watch it again!

Coming to 'A Quiet Passion' after a mixed experience with Terrence Davies - would recommend 'The Deep Blue Sea' - I wished the film had more life to it than was manifest by the reality. Some good moments in terms of showing how governed the characters were by a particular approach to religion, alongside evocative set design & photography. As a whole though not entirely successful at getting underneath the surface, but still worth a viewing.

Flat and dull - A Quiet Passion review by JM

It started off quite well, with the feisty children and then some witty repartee reminiscent of Jane Austen. But around about the first hour, it started to become quite tedious and really too dull, too understated. Maybe I was in the wrong mood, but after a break to attend to something else, I simply couldn't be bothered to watch any more of it. I don't whether I missed some gem in the second hour, but there was nothing to recommend in the first - not even any inspiring readings of her poetry.

So this becomes only the third hired DVD which I haven't watched right the way through. I just felt there were other things I could do in life that evening. I believe the story as depicted is accurate, no doubt with some added conjecture, and eventually I caught up with rest of Emily Dickinson's biography on Wikipedia which was quicker and more interesting!

A continuing enigma - A Quiet Passion review by DW

I had known something of Emily Dickenson's life from first reading a selection of her poems which inspired me to discover more about her. Even then she continued to remain an enigma and I'm not altogether sure that much more of depth was revealed in Davies' film. Yes, the society in which she lived, patriarchal and parochial, was well captured and we were given a glimpse into the way in which Dickenson's quietly rebellious character developed through school and home life.

Throughout, unfortunately, I found myself unable to empathise sufficiently with the poet, or rather how Davies along with Cynthia Nixon between then chose to portray her. It may be that I have never developed a liking for Terence Davies' films even when, on the surface, they appear to have all the necessary ingredients for the making of films of a very high quality. It's just me, I guess, and a matter of personal taste.

I had heard of Emily Dickinson, of course, and had read a few of her poems, but to put myself more in the picture I looked her up and found her described as shy, unassuming and educated. Something seems to have happened in the making of the film as it gave me quite the opposite impression. I watched it right through and gave it my full attention, and had no quarrel with the acting or the interiors, but although it began well I generally found the film boring, the subject obnoxious, her family uninteresting and her poetry miserable. It must be one of the few films that I have really disliked - or maybe it was just this portayal of Emily Dickinson that I disliked!