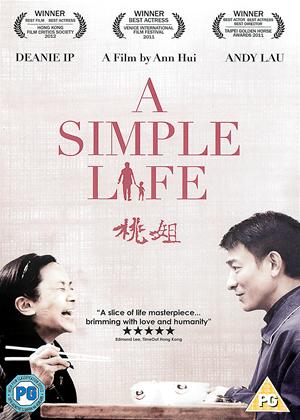 Reviews (2) of A Simple Life

Eastern fans only - A Simple Life review by JD

Of the far eastern films I have seen it can be said, with as much truth as any generalisation, they are slow, some monumentally slow, some glacial. This is not in these categories, but it is not to be rushed. The plot could easily be summarised in 20 words but I will not because there would be little left to savour. The photography is not so much bleak as plain. It is about very ordinary things, not superheroes but just good people.

performance by leading actor lacked emotion.character seemed very self obsessed.servant more like mother when young.shown little consideration as gets older.shines in care home.great under performance

Not to be mistaken for the heiress turned to manual labourer show that brought Paris Hilton to the headlines, Ann Hui’s The Simple Life is a far more accurate use of the phrase as it tells the small but moving story of a house servant who, after over sixty years of service to a Hong Kong based family, has a stroke.

Starring the well known Asian pairing of Andy Lau and Deanne Yip, who also appeared alongside one another in The Truth and The Unwritten Law, the film sees the traditional roles of care giver and receiver turned on their heads as Yip’s much loved Ah Tao finds herself facing the prospect of leaving her surrogate family home behind and moving to a retirement home and Lau’s Roger attempts to give Ah Tao the love and care she deserves.

Beyond this there isn’t much more of a story to The Simple Life its narrative follows Roger as he tries to find a balance between his career and desire to care for Ah Tao. The movie avoids many of the tropes one would expect to see if this were a Hollywood movie, yet there is no melodrama, the motivation behind Roger’s love is never called into question and his dedication to Ah Tao never falters. It is a far too simple and honest tale for any such messy complications.

What is most striking about the Simple Life is the way in which the two main character’s relationship is depicted with such small and delicate motions that you often feel as though you are privy to a truly loving and intimate relationship. Though the concept of the house servant does not necessarily translate directly into a modern Western culture, there is an almost maternal connection running between Roger and Ah Tao, one that many of us may recognize from our own family lives.

It is this aspect of the movie that is the most beautiful and painful; it speaks not only to the growing aging population but also to those of us who must witness our love ones pass into the fragility of elderly life. This film speaks to us with an openness that is quite foreign to many of us, allowing us to face both the best and worst of the situations that many of us know await us in the future.

A simple and easily watched movie, the Simple Life strikes many an emotional cord without any of the manipulation or drama of its Hollywood counterparts.