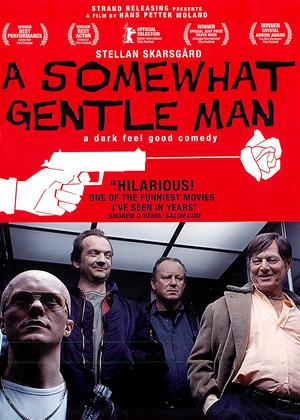 Sign up
Uncle Boonmee Who Can Recall His Past Lives

Reviews of A Somewhat Gentle Man

A Somewhat Gentle Man is a Norwegian comedy film about, to put it bluntly, sex and murder. This film is far from Norwegian answer to American Pie or such other teen-based sex-capades, A Somewhat Gentle Man is more like a male driven episode of Sex and the City directed by Woody Allen on one of his down days. Where once were shoes and fancy restaurants are crime and the plain and thread-bare bedrooms of those at the bottom of the social pile.

The movie has an awkward charm to it, as ex-con Ulrik played by Stellan Skarsgård who you might recognize as Orlando Bloom’s dad in Pirates of the Caribbean: Dead Man’s Chest, tries to get his life back on track after serving a long prison sentence for murder. Unsurprisingly things do not go well for Ulrik in his new life-without-crime and he can not seem to finish anything without being sprung upon by some woman or another.

The film is a little ridiculous and a little bit sweet; Skarsgard’s performance is excellent, as ever and lets his face do all the talking, whilst the plot meanders along minding its own business. It is no master piece, but it’ll make you laugh, and even throw in the occasional “aww” that’s usually reserved for kittens playing with string. It’ll definitely make you cringe and be un-biddingly reminded that your parents might still have sex, but over all, the movie is an endearing and pleasant piece of cinema that’s bound to bring a smile to your face on a rainy Wednesday.