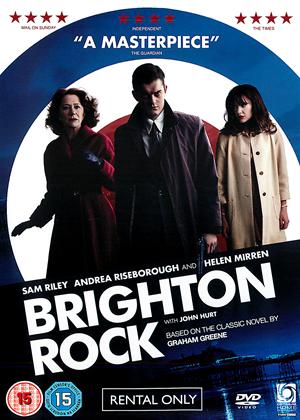 Synopsis:
The year is 1 964. The place is Brighton. A once quiet seaside town is suddenly overrun by gangs of sharp suited Mods and greasy Rockers looking for a riot. Amongst the chaos lurks top Mod and gangster Pinkie Brown. Ruthless, ambitious and horrifically violent. Pinkie will stop at nothing in his brutal quest to make a name for himself within the criminal underworld. But when a cold bloodied killing links him to a waitress named Rose, he uses seduction to secure her silence. Can Rose be saved in time from Pinkie, or will he drag her further into a world of death and damnation?
Actors:
Sam Riley, Andrea Riseborough, Helen Mirren, John Hurt, Philip Davis, Nonso Anozie, Craig Parkinson, Andy Serkis, Sean Harris, Geoff Bell, Steven Robertson, Maurice Roëves, Steve Evets, Francis Magee, Adrian Schiller
Directors:
Rowan Joffe
Writers:
Rowan Joffe, Graham Greene
Studio:
Optimum
Genres:
Drama

Atmosphere lost in remake, but I enjoyed it - Brighton Rock review by RP

I hesitated for some time before writing a review of this film as I'm in two minds about it. Is it a pointless remake? Certainly, Graham Greene's 1938 novel and the original 1947 film starring a young Richard Attenborough are classics. But this remake does have something about it.

Updating the time to the 1960s works reasonably well (with excellent photography, and the use of Eastbourne to stand in for many 'Brighton' backgrounds) but one element of the period – and an important one – has been lost. While the film has references to Catholicism, by the 1960s religion was playing a much reduced part of everyday life and certainly in the largely secular England of today religion plays a vanishingly small role. Yet the underlying theme of the novel is about faith, guilt, sin, good and evil, right and wrong, hatred, love, damnation, confession and redemption – almost all of which is lost in the remake. The atmosphere is lost, and it becomes an exercise in story telling.

The remake also keeps the ending from the 1947 film with the record jumping so that it repeats 'I love you', rather than the novel's original ending where Rose will hear 'the greatest horror of all'.

Pinkie is played by a creepy but too-old Sam Riley (in the novel Pinkie was a 17 year old twitchy, nail biting, juvenile delinquent). Rose is well played by Andrea Riseborough, but Ida is played by a miscast Helen Mirren. And the film has a number of anachronisms.

So, it's a bit of a curate's egg: good in parts. I enjoyed it, but I really do wonder if a remake was justified. I guess it will be if it introduces today's audiences to Graham Greene's work – but this really isn't a mainstream film, so I suspect that unfortunately it will fail.

Despite its faults I enjoyed it. I'll give it 3/5 stars, but it won't be to everyone's taste...

Is the book better? - Brighton Rock review by CP Customer

Really disappointed by this film. It looked good - was nicely shot with good period style clothes, buildings etc etc but boy was it slow! Considering the excellent cast and renowned novel I expected much better. Mind you, I never finished the book so maybe it's just that it's too true to the novel!

Based on the classic novel by Graham Greene of the same name and a remake of the 1947 film starring a young Sir Richard Attenborough, ‘Brighton Rock’ is now transposed to the crime underworld of 1960s, where the pebble beach isn’t safe and the idyllic location disguises its ugliness. Pinkie Brown (Sam Riley) is a sociopath gangster, rising up the ranks as his gang’s leader despite being a teen.

When a man named Hale (Sean Harris) betrays Pinkie’s gang, he sets out to shake him up and eventually, killing him. Rose (Andrea Riseborough), a young waitress, has somewhat been linked to the crime and could incriminate Pinkie. To cover his tracks, Pinkie pursues Rose and they get together with Rose turning madly in love for Pinkie. His plan works but Ida (Helen Mirren) will do everything she can so Rose won’t get entangled in the dreadful web that Pinkie has woven. What ensues is a chain of events of escalating crimes and moral ambiguities. Does Rose continue to be Pinkie and his gang’s moll? Does Pinkie truly love Rose?

‘Brighton Rock’ is the first feature of director Rowan Joffe and he is a brave man for doing this because both the Graham Greene novel and its first screen adaptation are heralded as classics. However, the hipster-ish treatment, setting it to the 1960s with gangsters looking more like GQ models in a fashion spread, took away the threatening quality of being associated with them. Suddenly, it looks dang better to be in a gang. Sam Riley as Pinkie attempts at a James Dean-like gait but his death-glare is too severe, it can go overboard sometimes. As Rose, Andrea Riseborough plays being a naïve young girl well. But it’s the supporting cast – Andy Serkis, John Hurt, and Dame Helen Mirren – who move the story along. Their veteran acting skills make up for what seems to be half-baked performances of its leads.

‘Brighton Rock’ is a crime noir – but you wouldn’t know it, what with Mods, Rockers, and mopeds all over the place. Besides, is the name Pinkie Brown menacing enough for you?