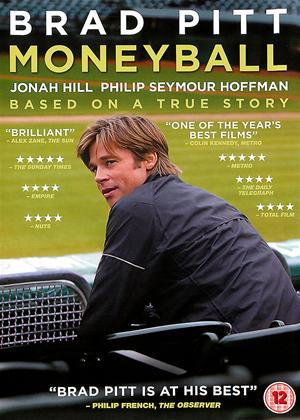 To say you dont need a knowledge of baseball for me is wrong as it would have been helpful to have an understanding of how the players sales, positions etc work or an idea of the history behind the film.Probably did well in the USA

This is a film, based on a true story, about the building of a baseball team around player stats. Sounds fun? Yeah, right. It’s competently written and directed but it’s impossible to care. The baseball movie A League of Their Own worked because it focussed on the players as characters but the players here are barely sketched. Instead the film focusses on the team’s general manager (Brad Pitt) and his obsession with the stats. Brad gives such a charismatic performance that it almost makes the film worth seeing for him alone, but even he is saddled with an irritating father-daughter sub-plot. ‘How can you not be romantic about baseball?’ he asks. If your answer is ‘quite easily, actually’ the film will hold little interest.

I would have rated this film as 4 stars after viewing 3/4 of the film . My downgrading was related to the need for some editing of the latter sections of the film. It is about people adjusting to change . You certainly do not need intimate knowledge of baseball to enjoy the changing fortunes and emotions of the people.

Brad Pitt and Jonah Hill star in this based on a true story tale about baseball manager Bill Beane, who took the lowest-salaried team in the country into the record books in the space of a single season.

The team, Oakland Athletics’, started the season on 11 consecutive losses and ended with a record breaking 20 game winning streak, all thanks to a little intelligence and creativity on the part of their manager.

Now, I don’t know anything about baseball so this was a totally new story to me, although some may remember it from 2002’s news headlines, but what the movie shows is Beane being persuaded by an intelligent and surprisingly understated Jonah Hill (playing Peter Brand) that rather than looking to the famous and more importantly expensive players in the field that he should look to individual’s key performance statistics and build his team from the talented but overlooked.

Despite the fascinating story what struck me most about Moneyball were the performances, the casting of Hill is an absolute shocker and yet he is perfect in the part. There is no sign of the pot smoking, sex obsessed teenager we have come to know him as, and instead Brand is a quiet, insecure intellectual whose very voice speaks his uncertainty and anxiety. Yet he is a fantastically courageous character, brave enough to stand by his unfounded ideas indiscriminately.

Pitt’s performance as Beane is also very striking, as he plays a lonely man, almost broken by the pressures of his career; yet he too is determined and brave, taking a huge risk by following Brand’s theories. Of course Phillip Seymour Hoffman is brilliant as always, a character actor through and through he plays a gruff and grizzled tobacco chewing baseball scout, very set in his ways and vocal about it too.

All in all Moneyball was a total surprise, an interesting, intelligent and moving drama.