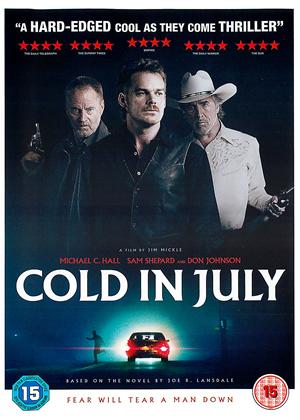 Reviews (6) of Cold in July

A really good movie. It felt like it was inspired by 80s cult crime thriller, 'Blood Simple' but with a comic twist. It's not a straightforward crime thriller - about a third of the way through it becomes quite comedic with the introduction of Don Johnson's pig-farmer/PI. Some of the dialogue between Shepard and Johnson is hilarious. It wouldn't ordinarily work but for the skilful direction of Jim Mickle which harks back to 80s cult movies. The storyline is quite confusing. It does beg questions and I'm not sure it clarifies exactly what involvement Freddy has with the Dixie Mafia and the police. But it didn't detract from the film for me. It always more interesting as a film exploiting different genres. The dialogue has the hallmarks of crime thriller but it has it's tongue firmly in its cheek. It's very original, it always kept my attention and there are plenty of twists. Personally, I don't think believability matters too much - it's original in the way it melds very different genres yet is consummately entertaining. I'm glad I saw it and strongly recommend it. It's not a conventional thriller but that makes it all the more worthwhile.

I waited to write a review for this film until I'd watched 'Mulberry Street' and 'Stakeland', also directed by Jim Mickle and which came highly recommended. While formulaic (respectively, nasty virus turns normal Americans into flesh-eating rats, road movie with added vampires) I quite enjoyed them - they were well done, for their budget and within their budget. So, would Jim Mickle succeed with this crime thriller genre film?

In a word, no. It's not the fault of the direction, which isn't at all bad - it's the storyline, which is frankly, silly, unbelievable tripe. But unfortunately Mr Mickle shares writing credits for the script.

The central role is played rather well by Michael C. Hall, who manages to get us to feel a little sympathy for a weak and somewhat unlikeable character. And that's about it - the story is so ridiculous that the other actors (Sam Shepard, Don Johnson and the director's sidekick Nick Damici) simply cannot make their characters appear anything other than silly.

I really liked the two other Jim Mickle films I have seen but this was a great disappointment. There's plenty of violent shooting and bloodshed, but although it has a twist or two it's more silly than thrilling. Of course, mutant viruses and vampires are silly too, but that's to be expected - with a crime thriller there has to be something realistic to relate to. And there's nothing here, except perhaps the initial 'fear of intruders' - after that it's downhill. Sorry, Jim.

2/5 stars - below average, and it's all down to the ridiculous storyline.

Cold in general - Cold in July review by CP Customer

Total lack of believable plot added to the overall disappointment of this film. Michael C Hall plays the average guy throughout , Don Johnson tries to pep things up but the film lacks basic plot or storyline. More questions unanswered than satisfactorily explained.

The only female characters are the terrified little wife who is not allowed a voice (and is lied to by her husband), and the terrified little girl who is sexually abused and murdered on video. Our shoot-em-up macho heroes show no respect for women at all. How are films like this still being made? Is it claimed that this is 'ironic'?

This is a tense, closely observed thriller that develops into an enthralling watch. As usual these days, avoid the tell-tale trailer because if you think you know where this is going you’ll be wrong. Minor quibbles are a terrible title and a lack of oomph in places, although a dramatic electro score does wonders to up the ante. There’s also a clichéd family-man-finds-his-mojo subtext, most of which thankfully appears to have ended up on the cutting room floor.

Against this, it’s a pleasure to see Don Johnson still strutting his stuff. He turns up half-way through as a pig-farming private eye and steals every scene he’s in. It’s no spoiler to sat that the climax would be worthy of any western. Jim Mickle made one of the great vampire movies in Stakeland and this is on a par.

Starts promisingly, with an ordinary guy caught up in a random act of violence. Mystery develops. A twist occurs and the mood becomes darker. The plot promises to become grippingly convoluted. Then Don Johnson turns up as a ridiculous cowboy character and the movie snaps into comedy caper mode. The twisty plot evaporates, the comedy abruptly forgets why it came in and pretty soon all that's left is a hackneyed vigilante tale. Into the final 30 minutes the ordinary guy who led the narrative has been left completely behind along any shred of commonsense as the action rushes mad cow-like toward the slaughterhouse climax.

If you were to ask me to name the best zombie and vampire film’s I’ve seen in the last ten years I’m not sure I’d go with 28 Days and I’d definitely avoid the dreadful Twilight series, I think, after giving it much deliberation, I would probably come up with two small movies by a horror director that some of you might still not even have heard of, Jim Mickie’s Mulberry Street and Stake Land.

Turning his directorial gaze away from the horror genre however Mickie has made his first foray into a new genre, the crime thriller, adapting a film from another name that will smack for many of the horror genre, Joe R. Lansdale’s Cold in July. As if this writing and directorial combination were not enough however throw in a lead performance from one of the most versatile actors of recent years, Michael C. Hall (Dexter, Six Feet Under, Paycheck, Kill Your Darlings – the list goes on), and Cold in July was certainly going to be interesting, if nothing else.

What begins as simple revenge plot when Hall’s Richard Dane shoots and kills an intruder in his home in Texas and the intruder’s father begins following Dane’s family seeking retribution, turns into a paranoid fuelled narrative that twists around the characters causing you to question everything you thought you knew and believed about the world you are seeing on screen.

Hall, as ever, steals the show. His depiction of Richard is masterful, he manages to make us sympathize with a frankly unlikeable character, whilst his portrayal of Dane’s fear and uncertainty rattles your very bones. Sam Shepard is an excellent villain whilst Don Johnson’s flamboyant P.I is both unexpected and brilliant.

As with all great crime thrillers these are the words you look for, unexpected, uncertain, paranoid, however to pull them off with confidence, particularly on one’s first venture into the genre, is quite a feat and, thanks to both his own talent and the prestige of the material he was given to work with, Mickie achieves this with ease. I look forward to seeing how he fares in future ventures, perhaps a twist on the romantic comedy?