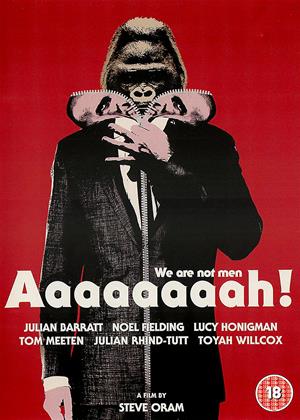 Oh dear... Yes, it's another of those films which the trendy critics fall over themselves to say they love, but which somehow don't appeal to a very large audience. The gimmick here is the exact opposite of the current "Planet Of The Apes" franchise. Instead of chimpanzees who have the intellectual and communication skills of humans but look exactly like and in some ways behave like chimpanzees, we've got humans who live in what seems to be a perfectly normal modern British city, but have the intelligence, behavior patterns, and verbal skills of chimpanzees.

The trouble is, that's it. The performances are actually very good, but since these "people" have the mentalities of oversexed ultra-violent toddlers, all the themes covered are extremely basic. Alpha males squabble and clash with varying degrees of violence, up to and including extreme, for the ownership rights to the prettiest females. Along the way, we get a very blunt satire of the chav lifestyle - many scenes are basically Paul & Pauline Calf taken to their logical extreme and then some, losing almost all the jokes along the way; these people may know how to operate computer games and the widescreen TVs they covet, but they can't even talk, and their bodily wastes usually end up on the floor. However, on the plus side, there is explicit onscreen genital mutilation played for laughs.

The originality of the premise, and the lengths to which it's taken - remember, chimpanzees have almost no inhibitions whatsoever about anything - initially drew me in because the cast really do give it everything they've got. But this is a textbook example of a one-joke film, and that joke is taken so far that it quickly ceases to be funny. Things like a TV cookery show for humans with the minds of monkeys might have worked very well as brief running gags in a sketch show (by an amazing coincidence, this film was made by the team responsible for "The Mighty Boosh"), though a similar spoof of "Cheers" seems absurdly belated, but the sheer relentless ugliness of it wears you down after a while.

I'm giving this repellent film more than one star because the level of effort the actors, most of whom appear to believe it's worth taking seriously, put into it is genuinely surprising, and at times comes close to making it work. But it's so one-note that they have an impossible task, and although it does have funny moments, they're outnumbered by things that are simply repellent. Yes, it's original, but that isn't everything, and it's a very shallow kind of originality. By the way, if you sometimes wonder whatever happened to Toyah Wilcox, here she is, playing a somewhat past-it but still marginally sexy chav ape-woman. And, almost unbelievably, the soundtrack is provided by what's left of King Crimson! I suppose at their age they need all the work they can get.

Well! Two casually dressed men walk into a rainy woodland. One of them, Smith (writer and director Steve Oram) extracts a photograph of a woman in a wedding dress, possibly his wife, weeps and throws it into the bramble. Sobbing, both men then proceed to urinate on the picture before turning and pointing triumphantly at the city on the distant horizon and march off purposefully towards it, communicating only in grunts as they go.

Aaaaaaaaah! is a most acquired taste to watch, but a delight to review. It removes itself from any definition, featuring an entire cast of present day, well-dressed Neolithic-style throwbacks. It is many things, and as it features an absurdist extreme portrayal of the human condition, why should it not also be seen as horror? Some have called it a kind of mirror to the ‘Planet of the Apes’ films; instead of civilised primates living in uncivilised conditions, here we have city-dwellers with modern amenities portrayed as base animals. Any scenes of strived-for humour centre around the penis, defecation, violence and sex. Is it a comment on the decline of society? Who knows! And yet any comedy is reflected purely in the characters - the actual playing, although absurd, is approached with commitment. This grotesque ‘parody’ is serious business.

Lucy Honigman (as Denise) and, yes, Toyah Wilcox (Barbara) live with, provide for, but are repulsed by, their husbands. Honigman has a secret friendship with Jupiter (Julian Barrett), who lives in the garden (in flashbacks, we are given the impression that Jupiter was the head of the family at one time, but has fallen from grace). Noel Fielding, the other half of ‘The Mighty Boosh’ duo, also has a small part which doesn’t last long. If you’ve seen his scenes, you’ll know what I mean.

When Smith and his ‘number two’ Keith (Tom Meeton) arrive, Smith and Denise appear to get married. And it is Smith’s new found dominance over the group that seems to thread any storyline this might offer. I quite enjoyed it. I don’t know what it is trying say, but it has inspired me to write these words about it, and you to read them. Bless you.