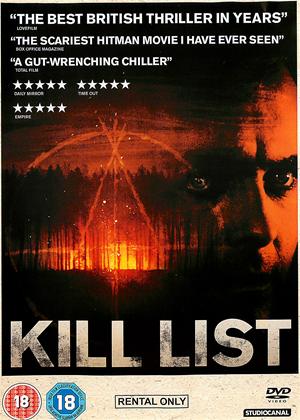 Slow starting at suburban dinner party with old ex-army mates Jay (Neil Maskell) + wife and Gal (Michael Smiley) + girlfriend, moving on as we learn that they are contract killers, moving on to accepting a contract to kill a list of people (priest, librarian, MP). And as the killing starts so does the violence - and the killing of the 'librarian' with a hammer is much worse then the violence in, for example, 'Drive'.

The story then takes a bizarre turn as the killers are pressured to complete the job and kill the MP and find him celebrating some weird ritual on his country estate. Chase sequence, scary stuff, building to a climax where Jay is forced to kill a 'hunchback' - with tragic results.

Plenty of violence, plenty of f-ing and blinding (don't watch it with your granny) as the story leads the viewer into an uncomfortable zone where belief is suspended and the disturbing, claustrophobic feel of the ending seems all too real.

This is scary stuff - if you like a mix of thriller + horror then give this one a go. You certainly won't forget it. 4/5 stars.

This begins with a full-throated argument between Jay and Shell (Neil Maskell and MyAnna Buring), who live the kind of life documented by the likes of EastEnders. Gal and his new partner Fiona (Michael Smiley and Emma Fryer) come around for a dinner party typically punctuated by further profanity lead disagreements – and then Fiona visits the restroom, lifts the mirror off the wall, and scratches a symbol on the back. When she leaves, she takes a tissue with a sample of Jay’s blood. The next day, she and Gal have split up.

Gal and Jay are contract killers. Their new job is with A Client (Struan Roger) who insists on sealing the deal by cutting hands and exchanging blood. After a series of violent exchanges that threaten to tip the drama into a graphic crime caper, Jay sees Fiona from his hotel window, inexplicably standing outside in the night, waving. Equally odd, a number of the men they have been assigned to kill make a point of ‘thanking’ Jay shortly before he kills them.

(Spoilers) In the final ‘chapter’, entitled The Hunchback, Jay is forced to combat a hunchbacked, masked character as the cultists surround them. He wins the contest by killing his assailant with multiple stab wounds. On removing the robes, he sees it is Shell, with their son strapped to her back, who he has killed. He is the victor, and is applauded by the cult, who embrace him as their own. As the other cultists remove their cowls, The Client, Jay’s doctor and Fiona are revealed to be among their number.

Like Director Ben Wheatley’s later ‘A Field in England (2013)’ this is almost impossible to categorise, and leaves the viewer wondering if everything that has occurred during the last 95 minutes actually comes together to make sense. The imagery stays in the mind, and, like in a dream, it is a challenge to put some of the pieces together. It is unsettling, graphic, convincing and compelling and the acting from all is exemplary.

It would be quite easily to settle down into Kill List; if you accidentally stumble in on the wrong scene you could be forgiven for thinking it is going to be an interestingly witty yet grey movie about a man’s attempt to overcome depression, yet the dreamy quality of the everyday life scenes could not be further from the contrasting hyper violent horror scenes that also populate this movie.

Two men, Jay (Neil Maskall) and Gal (Michael Smiley) are contract killers who find themselves working for a mysterious employer who has them travelling across Britain and staying in decidedly non-descript travel lodges and hotel chains and committing violent murders. Yet this is not the disturbing part of the film, the tone of the movie, the kind of constant yet distant ebb of evil that runs through the movie is striking and incredibly well portrayed by both actors and director alike.

Director Ben Wheatley manages to turn unbelievably normal incidents, like a visit to the local doctor or enquiries about the soap in a hotel bathroom, into dark and decidedly creepy scenes that would not be out of place in the most accomplished of horror/thriller hybrids.

As one of the stars of this year’s Fright Fest movie festival Kill List is definitely one of the best British horrors of the year, yet the ending is somewhat of a let down as the striking originality that has run throughout dissipates into a fairly generic ending.