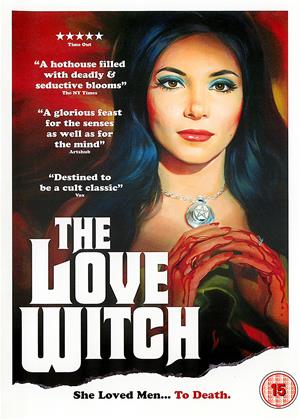 Reviews (4) of The Love Witch

Hard to like - The Love Witch review by RC

A strange film that doesn't make a lot of sense. A bit like a cross between murder she wrote and kill bill with strange cult/sex flashback scenes. But somehow with so much nudity is still quite bland and boring. Hard to invest or care what happens. Not recommended.

A perfect homage - but to what end? - The Love Witch review by RJ

I only have myself to blame for the two hours I wasted on this. From what little I knew about it (I always try to go into films as unspoilt as possible), I didn't think it sounded like something I would like, but I allowed myself to be swayed by the almost unanimous praise it received upon release.

So, as stated in pretty much every review I have seen of this film, it is a 'perfect homage' to cheap exploitation horror films of the 60's/70's. Anna Biller is the very definition of an auteur on this film - in addition to writing, producing and directing it she also did the music, the costumes and the sets. I gather it was seven and a half years in the making and it clearly must have been a painstaking project into which Biller poured all of her creative heart and soul. The question that kept occurring to me was - why?? Why so much effort to create a tonally perfect copy of any number of cheap horror flicks? Is there anything beneath this artificial veneer?

The depth that so many critics seem to have found here is supposedly to do with a feminist subversion of traditional gender roles. As far as I could see this amounted to a couple of the male characters being portrayed as infantile idiots unable to deal with having real emotions and..... that was about it.

The Sight and Sound review of this film opens by saying that this is a film that 'demands more than one viewing' in order to appreciate the 'razor-sharp subtext'. I am absolutely willing to believe that might be the case - I've misjudged plenty of films on first viewing before - but it will be a long while before I could consider sitting through this again.

Just thought it was interesting to note that as of today, 2 out of 2 people have marked my review as 'Not Helpful', and the other review has 3 out of 3 'Not Helpful' ratings - why are these people not writing reviews of their own I wonder?

This is such a good parody-movie that I felt the need to double-check the year in which it was made.

Anna Biller, the director, seems to have done pretty much everything in the background production yet she has still found time to introduce a nicely sharp feminist angle into the absurd proceedings.

Everything is pitch perfect: the garish colours; the lingering close-ups of Samantha Robinson's heavily made-up eyes; the mannered, ponderous acting; the cheapness of the props; the Dulux blood; the camp nudity. It all looks like the cover of a trashy 1960 pulp paperback novel.

I'm not sure that Biller has managed to balance the 'message' behind the film with the sheer fun elements, but it makes me want to see more of her work.

What do you do when you have all the creativity in the world, but none of the money? Well, you make a parody of course. But not only that: you make a meta-parody set in a time period where cheap-looking (for today’s standards) films were the norm. Thus, you kill three birds with one stone: you manage to pour your heart and soul into the project without it looking decadent (in the technical sense) and cheap; you leave yourself enough room to tell a story without the constraints of “contemporary” film conventions (lens flare, CGI, the over-reliance on close-ups ad nauseum, etc.); and finally, you give a perfect homage to the classics of an era long-gone – therefore making something that could be only described as a cult classic in the making.

For those of you following me on a regular basis (thanks mum), you already know my three main criteria of rating a film: competence (technical aspects), creativity (the way of telling a story), and narrative (the story itself). Let’s start with the easiest one, i.e. competence. The Love Witch is cleverly disguised as a pastiche (or homage, call it whatever you like) of 70s exploitation films, which often involved a man’s desire for female nakedness and a reciprocal love (and by reciprocal, I mean totally one-sided), over-the-top dramatization of seemingly banal events (such as making breakfast in bed), convoluted plotlines (he’s his own daughter), and some fake-looking murders thrown in there for good measure. In this light, The Love Witch manages to check all the boxes and more; in fact, this film manages to pull off what others failed to do: to channel an exploitation era (in both cinema and real life terms, another notable example includes the hilariously smart ‘Black Dynamite’) back in full force and show that yes, creativity is not dead. But I digress.

The cinematography, starting from the colors, sets, lightning, all the way to the sound mixing and film score, are all nailed perfectly and at time I couldn’t tell that I was watching a 2016 film that looked like an early 70s exploitation experiment in cinema. Then, creativity.

Yes, The Love With is creative beyond measure; the film plays with film conventions like it’s no one’s business, and overthrows several of these so-called “rules” so that it can bring gags in their place instead. This is all helped by the deadpan line delivery of the acting crew (who by the way, all did a superb job of capturing that essence) and the hilarious screenplay which is the best one I’ve personally seen in years.

Finally, the story itself. Which is quite good I might add. All you need to know before going into this cult masterpiece is that the narrative involves a suspected feminist witch who just wants… love. Not suitable for children, but then again – who the hell cares?