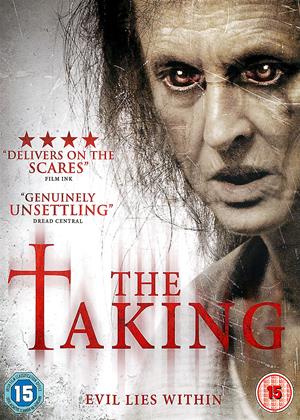 Reviews (1) of The Taking

‘Found footage’ continues to be maligned unnecessarily as a way of telling a story. It must be very difficult for actors to be convincing playing fictional non-actors, if that isn’t too convoluted a sentence. One of the first things that struck me about this film is how convincing everyone is in their respective roles. Anne Ramsey is excellent as Sarah Logan, so eager to be pleasant whilst betraying occasional jittery nerves concerning her mother, and over-doing the manners. Equally, as the titular Deborah, Jill Larson plays a very difficult part with nobility, dignity, uncertainty and the inevitable confusion that comes with Alzheimer’s disease, or whatever malady is effecting her.

For someone who likes horror films, it can be disheartening to sit through tepid, by-the-numbers pot-boilers with vacant acting and anaemic direction. Equally, it is hugely rewarding to find something as powerful as this – it is almost worth sitting through the dross to be genuinely unnerved and scared by a production that pushes all the right buttons.

Alzheimer’s is very real and can be a frightening condition. As Deborah says right at the beginning, she does not wish to be exploited. I too was intrigued as to how the illness could be used in a horror story without exploitation. The producers have managed it. Deborah’s condition rapidly deteriorates well beyond the ‘normal’ experiences of the disease, and her affiliation with snakes and inherited fixation with children makes that clear (from a slightly cantankerous but otherwise sweet, forgetful mature lady she becomes a venomous other-worldly creature that, in one of the most fearful scenes towards the end, appears to have her jaws locked, snake-like, around a child’s head).

The gardener and life-long friend Harris (Ryan Cutrona) shares a secret with Deborah, and for a while, it seems as if he is partly responsible for what looks very much like a possession. The truth makes sense of an otherwise slightly jumbled ending. With shaking cameras and only partially glimpsed scenes of gruesome horror, events almost threaten to collapse in upon themselves. But this doesn’t happen – we witness an almost happy ending of sorts, which, given the encroaching dread throughout, is something of a surprise. Except there’s more than a hint that it isn’t really a happy ending at all.

Apart from Cutrona, Larson and Ramsey, the documentary crew are extremely well-played also, demonstrating very real reactions to what is going on. I was pleasantly surprised that Michelle Ang (playing Mia, who headed the small team), who was so good in post-apocalyptic New Zealand drama ‘The Tribe (1999-2003)’ also had a popular stint in Australian super-soap Neighbours.

‘The Taking of Deborah Logan’ got under my skin. It unnerved me. Different things frighten different people. For me, the progressive revulsion of ‘The Exorcist (1973)’, or the recurring night curse of ‘The Blair Witch Project (1999)’ works for me because it taps into something real (in this case a real and distressing disease) and turns it into something truly macabre. Frightening.