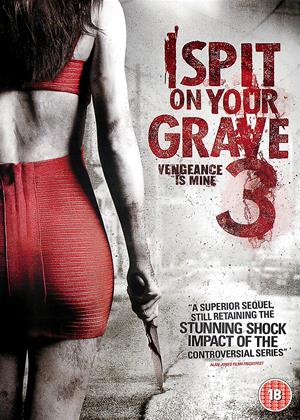 Synopsis:
Jennifer Hills (Sarah Butler) is still tormented by the brutal assault she endured years ago (I Spit on Your Grave - 2010). She's changed identities and cities, reluctantly joining a support group where she begins to piece together a new life. However when her new friend is murdered and the killer goes free, mixed with the tales of serial rapists from the support group haunting her, Jennifer is determined to hunt down the men responsible and do what the system won't - she will make them pay for their crimes in the most horrific ways imaginable. Only this time, no jury may be able to save her.
Actors:
Sarah Butler, Gabriel Hogan, Karen Strassman, Doug McKeon, Jennifer Landon, Corey Craig, Bobby Reed, Lony'e Perrine, Alissa Juvan, Joshua Kovalscik, Christopher Hoffman
Directors:
R.D. Braunstein
Producers:
Lisa M. Hansen, Paul Hertzberg
Writers:
Daniel Gilboy
Aka:
I Spit on Your Grave: Vengeance is Mine
Studio:
Platform Entertainment Limited
Genres:
Horror, Thrillers

Rent other films like I Spit on Your Grave 3

This is better than the second film and really follows on from the first film, but it has to much to live up to as the first was very good and now its all been done before so can't really beat it. Should of left it alone after the first one.

Spoilers follow ... - I Spit on Your Grave 3 review by NP

The 2010 remake of the original 1978 rape-revenge film has so far spawned two sequels. The first deals with a similar storyline with new characters, whilst this returns to the original victim Jennifer Hills (played by Sarah Butler). Now, several years on from her original appalling ordeal, she is calling herself Angela Ditrenka, is receiving therapy and still having fantasies about killing anyone who shows sexual interest in her. And for a while, such interest borders almost on overkill. Everywhere she goes, she is fondled, leered at, and subject to coarse and intimidating abuse.

And yet, the way in which writer Daniel Gilboy chooses to continue Jennifer’s story is to have her confront her relentless (and understandable) disappointment in so-called justice, is to carry out revenge attacks on men who rape other people. To this end, she attends a fairly useless victim support group; on hearing of others’ tragic circumstances, she takes revenge on their behalf. The problem with this approach is that, whereas in the first two films, we see the antagonists perpetuate their horrific acts and are therefore eager to have retribution inflicted upon them; in this film, we only hear about their felonies. Therefore, when Hills adopts the familiar theme of dressing up to ensnare the perpetrators and kill them, the structure of the story doesn’t fuel quite so strongly our eagerness to see grisly revenge carried out.

And yet, this slight misgiving is balanced out by the fact that the story is very good, and well told and acted. Butler is entirely convincing in a very intense role, and she is supported by a mainly very talented cast. There are enough twists and moments of gut-wrenching gore (although pretty brief) to keep things gruesomely entertaining throughout. The structure of the telling is very involving too, with us being led to believe one thing when another is actually the case.

It would seem this is the final entry into the franchise. Other than starting again, I’m not sure how Hills’ story can continue. I really enjoyed this and was kept guessing throughout. Delightfully, all the twists in the narrative are carefully hinted at all the way along – no matter how far-fetched certain moments may appear, they all make complete sense.

I’m surprised this hasn’t garnered more positive online reviews. Sadly, there are unhappy views presented so passionately that ‘anyone giving this a 9 or 10 must be involved in the movie making as it is really poor (sic)’. It goes without saying that that expressed sentiment is untrue and simply displays those reviewers’ precocious view that no-one is allowed to disagree with them.