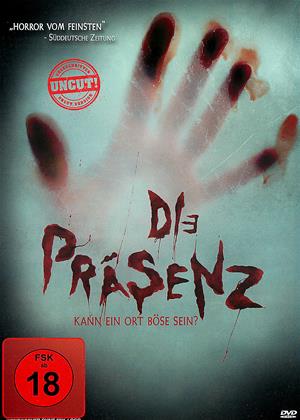 Synopsis:
In his studies of anthropology, Markus is dealing with popular superstition and the Poltergeist phenomenon. When his friend Lukas hears about a remote castle which is said to be haunted, Markus wants to take the opportunity to record something paranormal and they decide to spend a week of the upcoming holidays there. His girlfriend Rebecca is not let in before the three are on their way. The students gain unauthorized access to the gloomy water castle and arrange themselves for the night.
What seems to be fun at the beginning, becomes deadly serious very soon: something demonic is haunting the place and things start to get out of control… The movie is shot in the found-footage style and shows the deadly events of the upcoming days and nights.
Actors:
Liv Lisa Fries, Matthias Dietrich, Henning Nöhren
Directors:
Daniele Grieco
Producers:
Daniele Grieco
Voiced By:
Susanne Reuter, Andreas Stenschke
Writers:
Daniele Grieco
Aka:
Die Präsenz
Studio:
Daredo
Genres:
Horror
Countries:
Germany, Horror

Reviews (1) of The Presence

It would be lazy and disrespectful of me to describe ‘The Presence’ as a German version of The Blair Witch Project set in a castle. Yet that would give you a fair idea what to expect.

Three genuinely likeable, naturalistic friends (Markus and his girlfriend Rebecca and pal Lukas, played by Matthias Dietrich, Liv Lisa Fries and Henning Nöhren respectively) plan to spend some time as Hohnau Castle, an impressively isolated and abandoned mass of peeling corridors, vast rooms and of course, a dungeon. Their collective lack of phone reception is inevitable and given cursory mention, and time can then be spent on the two boys scaring Rebecca with various gruesome stories of the castle’s history. We have plenty of grainy webcam shots of rooms that linger just long enough for the audience to start scanning for any untoward movement or shadows.

It is a found footage film that presses all the right buttons and takes us into the slowly disintegrating world of the three studious youngsters – no posturing or arrogance here, and so we really care about them when noises of a crying child are vaguely heard and their food supplies prematurely decay. And yet this actually creates a problem – why do three intelligent people insist on staying when unpleasant things start happening? Rebecca’s protests are largely unheard, which renders the other two rather heartless at best and suicidal at worst! They should have listened to her …

The setting is incredible. Not only is Hohnau Castle beautifully austere, but the surrounding woodlands, frequently dotted with frozen snow, are classically foreboding and haunted-looking, with the winter draining most of the colour away.

Whilst the atmosphere is terrific, the overall effect is creepy rather than terrifying, despite the best efforts of the trio. ‘The Presence’ doesn’t try anything radical, rather it has fun with the genre and results in an engagingly sinister 83 minutes.