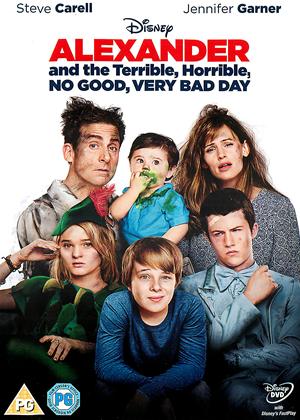 More like Alexander and the Terrible, Horrible, No Good, Very Bad Day

Reviews of Alexander and the Terrible, Horrible, No Good, Very Bad Day

Alexander and the Terrible, Horrible, No Good, Very Bad Day (what a title) achieves a level of zaniness with relatable characters for a family film that strangely works much better than I thought. Based on the popular children’s book by Judith Viorst, it's the tale of the unlucky soon-to-be 12-year-old Alexander (Ed Oxenbould) who seems to be perpetually having day after day of things going wrong. Gum is caught in his hair, classmates Photoshop him onto female pictures and he even manages to set the science classroom on fire by accident. This is a stark contrast to the rest of his family who seem to be on top of the world. But the tables are turned when Alexander’s birthday starts going right while the rest of his family has a day that goes horribly wrong. They’ve contracted Alexander’s bad luck after years of immunity via the old magical birthday wish.

This setup is a golden ticket for the writers and directors to throw Alexander’s family into a series of absurd accidents. While it does go for the big laughs, they rarely go outside the realm of reality. Just about every bad thing that happens to them feels as though it could happen. The family wakes up too late and scurries around the house in a frantic panic. The car battery dies after a light was left on all night. The teenage daughter awakens sick on the day of her big play. The teenage son cheers in triumph at landing a date for the prom, but accidentally ends up smashing a trophy case in the process. These are all very plausible moments and never seem too contrived to be disengaging for the older audience. They also build from one incident to the another so that there’s a certain method to the madness.

But what’s most admirable about a film like this is how likable all the characters appear. They do not exist as an a-typical family of bowling pins for the rolling thunder of hilarity. Right from the start, they are established as a uniquely modern, but still grounded family unit. Steve Carell plays the stay-at-home dad who takes care of the new baby while seeking a new job. He is not depressed or bitter about his wife being the breadwinner and relishes his time for baby yoga (which is apparently a thing). He even manages to keep his cool when he ends up bringing his infant child along to an interview he lands at a video game company. Despite his son smearing a marker all over his face and the unease of an older man being interviewed by younger developers, Carell has a remarkable calm to dealing with the situation.

Every character of the family reacts similarly to their problems. They grow frustrated with the increasing pains that hinder their day, but never seem to fully transform into Michael Douglas in Falling Down. I rather enjoyed the resolution to the family solving their problems by banding together and thinking through their tough situations. The script narrowly avoids the silly out of having Alexander undo his wish (the tactic that Liar Liar resorted to). He admits his wish, but his dad claims that the wish had nothing to do with any of this and that it was just an off day. Alexander makes a very mature decision to accept that his bad luck isn’t just fate and that he is in control of his own life. How could you not root for this family to succeed over such comical pitfalls?

Despite some reasonable and human reactions, most of these comical disasters tend to venture just a tad too far down the silly slope. This reaches an inevitable requirement for seemingly all modern family movies: funny animals. The final hurdle for the family to cross comes in the form of an Australian petting zoo setup at their house in which the animals escape. Steve Carell corners a kangaroo that promptly kicks him back in some of the most blatant computer graphics for a stunt. Other moments go slightly over-the-top in kicking the family down a hole. The destruction of the family car during a failed driver’s test goes slightly overboard with a crash and a flung-off car door which stops just short of the collected family to witness. And the failed publication of Alexander’s mom (Jennifer Garner) just feels too simple as her potty book replaces jump with dump (which causes a bigger outrage at a reading than one would assume).

One annoying trait that’s maintained for these types of family films is how nearly every secondary character seems to be out to get our protagonists. A suggestive driving teacher seems determined to make her students fail. A snippy teacher seems more concerned with making snarky references than teaching a class. A bitter female book partner with thick glasses explodes all over the mom trying to make it into the big leagues. These felt like characters that are trying way too hard to inject an extra layer of comedy into a film that already has enough going for it.

Director Miguel Arteta brings a surprising amount of personality to a film that could’ve been just another throwaway children’s book adaptation for a rainy afternoon. He saves a rather simple premises and paints over the tired area with some effective characters and comedy that doesn’t pander or wain. Certain parts don’t stick to the wall quite so well, but there’s a zippy enough pace to keep a certain flow. Alexander and the Terrible, Horrible, No Good, Very Bad Day may not be a family classic (or even an easy-to-remember title), but it’s a comedy more genuine for kids and adults from a format that’s usually pretty by-the-numbers.