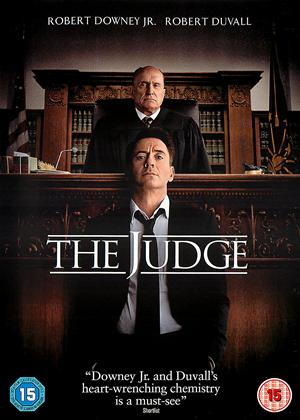 Reviews (3) of The Judge

Boring - The Judge review by SL

What a depressing boring film, good actors but not a feel good film in any way... after watching this I needed to watch something a bit more less depressing to stop me from going to sleep..

Duvall always worth watching, and although the storyline is quite predictable, works quite well with Downey.

See The Outfit with Duvall when he was younger. Joe Don Baker in that as well, who was great with Walter Matthau in Charlie Varrick......similar era crime films. Slow by todays standards, but still a good watch..............

Great acting from Downey and Duvall. Well plotted but I am taking a star off for the sugar coated ending

There are no two ways about it: The Judge is amazing. It has the perfect combination of good story, talented actors, and witty though serious dialogue. All of this adds up to four out of five stars by my calculations, and is definitely a film everyone should check out.

The Judge follows Hank Palmer (played brilliantly by Robert Downey Jr.). Hank is a very successful high-priced defence attorney working in Chicago, with questionable ethics. While in court, he gets the unexpected news that his mother has passed away, and he decides to take a very short trip back to his small home-town to attend her funeral. His short stay turns into so much more when his father - a well-respected Judge in the town - is suspected of murdering a criminal he once sentenced in his courtroom. Will Hank he able to put aside the differences between he and his father? Is his father guilty? And will the family be able to make it through this struggle?

The first thing I saw of this film, even before the trailer, was a close-up shot of Robert Downey Jr as I walked past the open door of a theatre. I was intrigued already.

Since The Practice, Ally McBeal (which of course RDJ also starred in), and Boston Legal, I have loved legal dramas. This film definitely has that, albeit that storyline ends up taking a backseat to the relationship aspects. It lasts two and a half hours, which means it does sometimes drag a little. However I don’t know if it would be as good with anything omitted. I also doubt it would have achieved the same success if it did not have this amazingly talented cast.

The amount of progress that Robert Downey Jr has achieved is monumental. He is open about the mistakes of his past and has turned his life around. Despite the drugs and alcohol he once ran on, it has definitely not dampened his acting ability. This is just another absolutely beautiful performance by RDJ, and it is fascinating to see his versatility. The rest of the cast also did a phenomenal job, and include Robert Duvall, Vera Farmiga, Billy Bob Thornton, and many others. Everyone has excellent chemistry and wholly became these well-scripted characters.

The Judge is directed by David Dobkin, who hasn’t got an overly impressive resume. He is predominately known for directing comedies, but has shown he is also more than capable of keeping the audience visually entertained even through quieter dramatic scenes.

After some very negative reviews were posted by critics, there was an influx from cinema-goers who rated this film overwhelmingly positive. Like all films ever made, there is not going to be 100% viewer appreciation, but when you look at the individual parts of The Judge, it is hard to find fault in them.

Be prepared to hear a lot about this film and see it nominated for many awards.